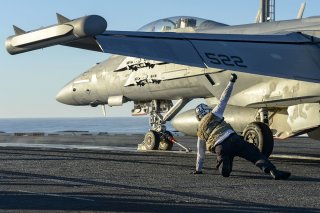 After multiple sources reported that U.S. Navy Rear Adm. Michael Studeman, director of the J2, made an unannounced visit to Taiwan this week, Beijing has vowed a response. Chinese Foreign Ministry spokesman Zhao Lijian said China “firmly” opposed any form of official exchange or military contact between Washington and Taipei.

Studeman’s reported visit came as the Trump administration has increasingly engaged with the Republic of China's government in Taipei. The Pentagon has declined to comment on whether Studeman actually visited Taipei, however the two star admiral would have been a likely candidate to make such a trip. Studeman, who is the son of a career naval officer, is a 1988 graduate of the College of William and Mary, and is also a distinguished graduate of the Naval Postgraduate School, and honors graduate in Mandarin Chinese from the Defense Language Institute and a distinguished graduate of the National War College.

According to USNI News, while Studeman's reported visit to Taiwan may have given concern to Beijing, it actually would not be unprecedented. USNI News quoted Eric Sayers, a visiting fellow at the American Enterprise Institute, who explained that active-duty officers at the two-star level have previously visited Taiwan.

“There is a precedent. However, the goal on both sides has been to keep these military-to-military exchanges discrete so they can continue on a regularized basis,” Sayers said. "It is unfortunate this one leaked out. Visits of this type are consistent with long-standing U.S. policy and are critical to ensuring our two militaries remain closely aligned to deter Chinese coercion.”

The administration also recently authorized billions of dollars of arms sales to the Republic of China (Taiwan) to help it fend off increased aggression from the People’s Republic of China (PRC), which sees the independent, self-governed island as a breakaway province. Beijing has increasingly made it clear that Taiwan will be returned to its control, by force if necessary.

The PRC government has also publicly denounced the arms sale, and the Chinese Foreign Minister has stated that it urged “the United States to strictly observe the one-China principle and the three China-U.S. joint communiqués, and stop selling weapons to Taiwan or having any military ties with it.”

China has already declared sanctions on U.S. defense contractors as a response to the arms sales, while the U.S. government has continued to maintain its unofficial ties with Taiwan and presided as its main source for military hardware. This includes a recent deal worth a reported $2.37 billion, and follows the sale of three additional weapons systems in a separate deal worth $1.8 billion.

Despite the harsh reaction from Beijing, the Trump administration reaffirmed its commitment to Taiwan and offered its own equally harsh warning should the People’s Republic of China mount a military effort to bring the independent island nation under its control.

“I can’t imagine anything that will cause a greater backlash against China from the entire world if they attempted to use military force to coerce Taiwan,” White House National Security Adviser Robert O’Brien said Monday during a visit to the Philippines. “The U.S. is with her friends in Taipei. We will continue to be there.”