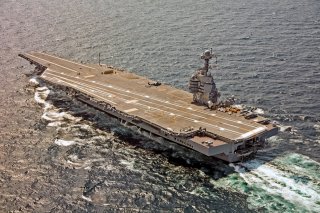 It was just eleven months ago that warnings were issued that the USS Gerald R. Ford (CVN-78) may not be ready to deploy until 2024, six years after the planned 2018 first deployment. The timeline slipped due largely to developmental delays in the new technologies that were included aboard the first-in-class nuclear-powered aircraft carrier.

Other delays came about due to the Department of Defense’s (DoD’s) decision to undergo full-ship shock drills before its first deployment, USNI News reported last October.

Now fast forward to where we are today, and it is evident that the warship has made considerable progress including reaching key milestones such as its Air Intercept Control (AIC) in her Post-Delivery Test and Trials (PDT&T). USS Gerald R. Ford was procured in fiscal year 2008 (FY2008), and according to FY2021 budget estimates cost approximately $13.3 billion (in then-year dollars). The warship, which was commissioned into service in July 2017 and currently the Navy is completing work on the construction, testing and certification of the carrier’s eleven weapons elevators and to correct other technical problems aboard the ship.

As Defense News reported this week, the carrier is currently executing a busy underway schedule supporting carrier qualifications for aviators, but it continues to work through issues relating to at least twenty-three of the new technologies that have been incorporated into the ship. The ship has also been plagued with ongoing technical problems ranging from the Advanced Weapons Elevators to its toilet system.

The electronic elevators were specifically engineered and built for the Ford-class and were intended to massively step up the pace and strength of the carrier air attack. However, the elevators have performed as promised and it could until late next year or even into 2022 before the elevators are finished.

The toilets meanwhile have been an ongoing problem, and cost a reported $400,000 to unclog the system. The USS Gerald R. Ford is also the first aircraft carrier not to feature urinals in the gender-neutral bathrooms on the ship. The Navy’s decision was to increase flexibility when it comes to shifting berthing arrangements for the crew, but critics have noted a number of issues—from the fact that fewer than 18 percent of all the sailors in the Navy are women, and each toilet takes up more room than wall-mounted urinals.

The most recent—and potentially most concerning—issue came earlier this year when the new Electromagnetic Aircraft Launch System (EMALS) underperformed due to a fault in the power supply system. EMALS is replacing the steam catapult system that is currently used on the U.S. Navy’s Nimitz-class carriers. The fault in the electrical system curtailed flight operations on the ship for several days while the crew along with contractors worked to identify the issue.

“The issue we are working closely on is building out of the gate reliability, making sure [the Electromagnetic Aircraft Launch System] and [Advanced Arresting Gear] has the right sparing, parts and equipment in the event that something breaks,” Rear Adm. John Meier told a virtual audience during this past weekend’s annual Tailhook symposium as reported by Defense News.

“But it’s also making sure we have the right procedures and methodologies so those things don’t break,” Meier added. “We’re still not where we want to be, but we've made great strides and we're getting better every year.”