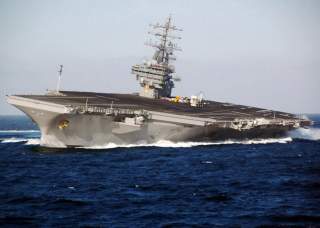 The Triton is built with a thicker, more stiffened wing compared to the Global Hawk to enable the aircraft to rapidly change altitude in adverse or icy weather conditions. The drone uses a heated "engine inlet" to prevent ice build-up, Northrop Grumman information states.

The Navy's emerging MQ-4C Triton, which will introduce new tactical and strategic dimensions to maritime combat, is on track for early operational capability in Guam by the end of this year, service officials said.

Surface warships, reconnaissance aircraft, ground sensor nodes and even fighter attack aircraft will be better positioned to receive targeting data on enemy movements both faster and across farther distances than currently possible.

The Triton is an intelligence, surveillance and reconnaissance drone designed to bring endurance, altitude, range and persistent stare ability over a wide, expansive area; it can stay on missions for over 24 hours at altitudes greater than 50,000 feet, Navy developers explained.

Using specially configured maritime sensors and radar systems, the Triton can cover broad areas out on the ocean in a single mission. The idea is to provide ship commanders with an ability to detect and see targets, threats and items of interest in real time from great distances using the sensors, cameras and data-links on the drone. The 45 foot-long, 32,000-pound Triton aircraft has a wingspan of 131 feet. Other specs include a full day’s worth of flight, an altitude limit over 10 miles, and an operational range of 8,200 nautical miles.

The Triton is intended to bring a substantial tactical advantage to the Pacific, in particular, given the often discussed "tyranny of distance" phenomenon known to cause challenges in the region. The vast expanse of territory and oceans throughout the Pacific naturally makes reconnaissance missions much more difficult. The Triton's range and reach, therefore, is designed to connect various nodes across dispersed areas, including land weapons, aircraft carriers, amphibious assault ship and other naval combat assets.

A technology able to better network and connect dispersed or dis-aggregated maritime forces brings significant new implications for a modern threat environment. Potential adversaries are known to possess a wide range of advanced long-range sensors, drones and weapons - making it easier to target US Navy forces. Accordingly, the Navy is increasingly prepared to conduct more "dis-aggregated" missions as needed to accomplish wide-spanning objectives while functioning as a less visible or aggregated target.

The sensor package being designed for the aircraft includes what the Navy calls a multi-function array sensor. The Triton's electronics include an electro-optical/infrared sensor, a 360-degree active electronically scanned array radar and inverse synthetic aperture radar (ISAR), among other things, Navy developers have said. The sensors create a common operational maritime picture including images, data and full-motion video. An Electronic Support Measure built into the Triton is also able to detect maritime signals.

Synthetic Aperture Radar, or SAR, sends an electromagnetic signal forward and then analyzes the return signal to paint a picture or "rendering" of the terrain below. SAR is primarily used for land missions, whereas ISAR is especially engineered to zero in on targets in a maritime environment, according to Navy and Northrop Grumman officials.

The Triton is built with a thicker, more stiffened wing compared to the Global Hawk to enable the aircraft to rapidly change altitude in adverse or icy weather conditions. The drone uses a heated "engine inlet" to prevent ice build-up, Northrop Grumman information states.

The Triton is also an autonomous air vehicle able to chart a course without needing to be remotely piloted, Northrop Grumman developers said. Computer algorithms and on-board systems enable the aircraft to account for wind, temperature and altitude conditions.

The Navy has also announced that next generation aircraft avoidance systems are being installed on the Triton. Northrop Grumman received a contract to install the Automatic Response Module of the Airborne Collision Avoidance System X into the MQ-4C Triton’s avionics system.

In addition to being stationed in Guam, Tritons have also been planned for the eastern and western U.S., a location in the Middle East and in Sicily, Italy, Navy officials have said.