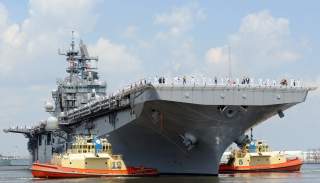 “Maintenance on surface ships based overseas took longer than planned for 50 of the 71 maintenance periods—or about 70 percent—started during fiscal years 2014 through 2018,” warned a new Government Accountability Office (GAO) report. “More than half of these maintenance delays lasted a month or longer, which reduced the ships' availability for training and operations.”