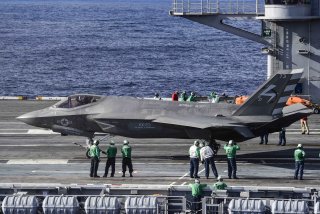 Four enlisted U.S. Navy sailors and one junior officer are being charged in connection with a leaked video showing a recent ramp strike during an attempted landing aboard an aircraft carrier.

Off the Deck and Into the Ocean

An F-35C can be seen approaching the USS Carl Vinson’s flight deck during the video. However, the approach is too low, and a landing officer can be heard yelling at the pilot to “wave off,” which means the pilot should abort the landing to come around for another pass.

However, the F-35C does not gain enough altitude to wave off, and strikes the aircraft carrier’s front ramp. At least one of the airplane’s landing gear is shorn off, and the aircraft slides across the deck, leaking fuel and catching fire.

The airplane reaches the port side of the deck and falls into the sea. The harrowing video can be seen here and is worth a watch.

The video is actually a recording of a recording. It is a cell phone video of a monitor displaying the USS Carl Vinson’s PLAT system, a Pilot Landing Aid Television that records take-off and landing from the aircraft carrier flight deck.

An additional cell phone video of the incident exists, taken from the stern of the ship. That video shows the airplane's approach, but not the actual crash.

A photo also appeared on social media and showed the F-35C following the accident. The airplane can be seen floating on top of the ocean after the pilot ejected.

The Navy decided to charge only the sailors involved in recording the PLAT video, arguing that the PLAT video is government property and therefore subject to Navy approval before release. In contrast, the second video and the photo of the airplane were taken from personal cell phones.

“The sailors being charged under Article 92 are either being charged on a general orders violation theory or as a dereliction – as in they negligently failed to execute a duty not to record and leak onboard footage,” former military lawyer Rob Bracknell said to USNI News. “There are two reasons to charge this conduct: Leaking footage of a mishap might reveal platform or performance vulnerabilities to an adversary – maybe not in this case – but they want to deter the conduct in other cases and they want to deter sailors recording onboard systems with personal cell phones and broadcasting them.”