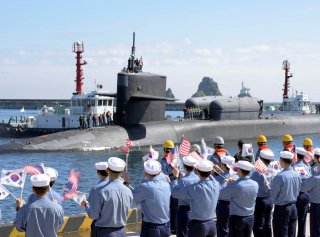 The U.S. Navy will officially start building its first nuclear-armed Columbia-class ballistic missile submarine as soon as next year, a move that could not come soon enough for many advocates of the new generation of boat intended to replace the long-serving Ohio class.

Research and Development and Science and Technology work has been underway for many years now, and a report in Seapower Magazine quotes James Geurts, the Navy acquisition chief, as saying the design maturity of the boat is “exceeding 86% percent right now.”

The design work is now being converted into specific manufacturing plans, Geurts said according to the Seapower report.

Early construction, however, has been underway for quite some time; engineers were working on “tube and hull” forging several years ago, a process wherein missile tubes are welded together into four-packs to be inserted into modules.

The weapons themselves, such as the well-known Trident II D5, have been upgraded into a more capable “DE” life extension variant. The improved missile and warhead, which will likely propel the weapons system for years to come, has greater reliability, guidance and upgraded “reentry bodies.” Eventually, Navy officials explain, there will be a new missile built for the Columbia-class too.

The sensors and electronics have also been well underway in terms of construction, along with newer applications of computer automation. The Columbia-class will, for instance, leverage “fly-by-wire” navigational technology built for advanced Virginia-class submarines.

This emerging system replaces hydraulic controls with a digital, joystick-driven navigational map which uses advanced computer technology to automatically set depth and speed for the submarine, subject to human guidance.

While much of these kinds of innovations, including a quieter “X-shaped” stern, electric drive and fiber optic cable have already been underway for years at this point, they are built to be “upgradeable,” meaning they can accommodate new technologies as they emerge.

The boats are expected to maintain the undersea portion of strategic deterrence well into the 2080s and beyond, ensuring a catastrophic second strike capability in the event that the United States is subject to a massive nuclear attack.