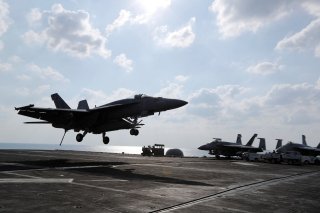 In response to North Korea's recent intercontinental ballistic missile launch, the U.S. Navy’s Seventh Fleet is conducting flights over the Yellow Sea, the body of water between South Korea and China.

“The Democratic People’s Republic of Korea (DPRK) has significantly increased the pace and scale of ballistic missile launches since September 2021. The United States strongly condemns these launches, to include the two intercontinental ballistic missile tests,” a statement issued by the U.S. Navy’s Seventh Fleet said.

The Navy’s statement also said that “as a demonstration of our resolve and commitment to our regional allies, U.S. Indo-Pacific Command conducted a carrier-based air demonstration in the Yellow Sea.”

“This demonstration was carried out in international airspace by 4th and 5th generation aircraft from the USS Abraham Lincoln, along with regionally-based U.S. Air Force aircraft, and is in addition to previously announced increases in ISR collection in the Yellow Sea and enhanced regional ballistic missile defense posture on the Korean peninsula.”

Although the eyes of the world are focused on Ukraine and the events in Eastern Europe, Asia remains both a potential hotspot and a region that is incredibly important for the United States’ long-term interests. And the Navy’s Seventh fleet seems to agree.

“We have made clear our growing concern over the significant increase in DPRK’s missile testing, and we will continue to take all necessary measures to ensure the security of the United States and our allies,” the Seventh Fleet added.

Despite the danger posed by North Korea’s ballistic missile and nuclear ambitions, the Seventh Fleet made sure to reassure both South Korea and Japan.

“We remain in close coordination with our allies and partners to address the threats posed by the DPRK. Our commitment to the defense of the Republic of Korea and Japan remains ironclad.”