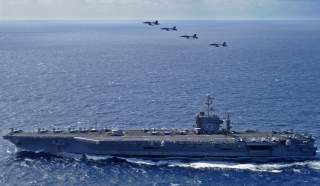 You have to hand it to President Trump; he bites certain topics in the nether regions and develops lockjaw. Certain naval technologies count among those topics. To wit: steam catapults in nuclear-powered aircraft carriers. Early in his presidency Trump made headlines railing against the newfangled electromagnetic catapults meant to loft warplanes skyward from the decks of Ford-class aircraft carriers, the next class of U.S. Navy flattops, at helter-skelter pace.

Shortly after taking office the president vowed to bring “goddamned steam” back aboard American carriers. (A nuclear-powered ship is a steamship that uses a box different from a boiler, namely a reactor, to generate heat to boil water. But main propulsion and auxiliary services may be driven by electric motors as easily as steam. Ford shipwrights skewed radically toward electric.) Catapults driven by steam pistons have been standard equipment since supercarriers debuted in the 1950s. They work, obviously, because they have worked for a long time.

Yet, like all steam contrivances, they are labor-intensive and inefficient. Steam tends to condense into liquid water, waste thermal energy, and cause trouble in long lengths of piping such as those connecting catapults underneath the flight deck with the propulsion plant deep within the bowels of the ship. Minor leaks are far from uncommon. Etc. Making the leap to electromagnetic launchers aims at bypassing these problems while, once perfected, boosting sortie rates by a hefty margin.

The faster the system can reset after launching one aircraft, the sooner it’s ready for the next. Swifter launches and recoveries mean more planes in the air mean greater pulses of combat power when it’s needed. And combat power’s what it’s all about.

But the “goddamned steam” controversy is about more than aircraft-carrier catapults, more than aircraft carriers, and even more than navies. How intimately political leaders should involve themselves in military tactical and hardware questions is a timeless question—and one that masters and practitioners have spilt considerable ink trying to answer over the centuries.

Prussian strategist Carl von Clausewitz is of two minds about sovereign meddling in martial minutiae. He urges statesmen to abstain from trifles such as the “posting of guards.” At the same time he insists that policy—and policymakers—must “permeate” all aspects of military affairs when these endeavors—including, presumably, the posting of guards—may have operational or political import. That brings them when the portfolio of statesmen. And presumably policymakers are the judges of what constitutes political import.

The statesman has the right to be wrong about such things.

Classical Chinese general Sun Tzu likewise recites a litany of instances when the sovereign should stand aloof from force design or tactics: namely when he’s ignorant of them! When ignorant of battlefield command, institutional practices, or administrative affairs, the wise sovereign keeps out of them.

Like Clausewitz, though, Sun Tzu phrases his guidance cunningly. He makes it blindingly clear that the general may not overrule his political master without consent. Or without personal peril. This was a fact of life in antiquity, when disobedient commanders tended to lose their lives to royal retribution—unless of course they disobeyed and won. Both strategic masters thus prefer for civil and military leaders to preserve the division of labor between them, but both also recognize there are cases when civil leaders must overpass their natural bounds—and they ascribe the authority to decide when to those civil leaders. This is a partnership of near-equals, not absolute equals.

This debate from the realm of theory carries over into the real world. A century ago French prime minister Georges Clemenceau proclaimed that war is too important to be left to generals. Clemeanceau’s British admirer Winston Churchill pioneered parts of the intelligence apparatus and can claim to be known as the father of the battle tank and other weapon systems. The greatest of American presidents, Abraham Lincoln, test-fired battlefield weapons on the White House lawn and is the only president to hold a patent. Theodore Roosevelt came to Newport to preside personally over a conference on battleship design.

It’s fascinating to see presidents and prime ministers dabble in matters far beyond their usual province. But if a commander must exercise caution before exceeding his military mandate, a political leader must exercise restraint before intruding into purely military undertakings. Back to Trump. Redesigning warships such as Ford-class carriers—vessels meant to use electrical power to run all auxiliary systems—is far from a simple or cheap endeavor. It’s doubtful in the extreme Washington will order such a redesign, whatever the president might say.

It is certainly fair to fault the navy leadership of the “transformation” age around the turn of the century for piling new and untried technologies aboard new hulls, one after the other. That compounds the danger that some widget won’t work as promised—and neither will the ones with which it interacts. Cascading failure is a prospect. But a fundamental redesign once hulls are in the water and nearing working status is no better. There’s no guarantee that will work either.

James Holmes is J. C. Wylie Chair of Maritime Strategy at the Naval War College. The views voiced here are his alone