The U.S. Navy Is Getting a New Robot Anti-Mine Submarine 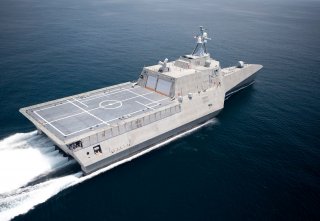 The program aims to keep U.S. Navy ships safe from mines by replacing mammals with machines.

The Knifefish is a “medium-class Mine Countermeasure (MCM) Unmanned Undersea Vehicle (UUV) designed for deployment off the Littoral Combat Ship (LCS),” and is essentially an anti-naval mine drone. According to General Dynamics, the Knifefish “provides the mine warfare commander with enhanced mine-hunting capability by detecting, classifying and identifying both buried mines and mines in high clutter environments.”

Unlike some other underwater autonomous vehicles, the Knifefish does not tow a sonar, but has a sonar built into its body, significantly streamlining the design and increasing range and endurance.

The Knifefish system uses low-frequency sonar in tandem with target recognition software to identify underwater targets. The Knifefish system is designed to essentially act as a sensor extension of its mother ship, allowing the ship to stay behind the Knifefish, away from minefields and out of harm’s way.

The Knifefish is intended to operate alongside the Navy’s Littoral Combat Ship system. Though facing many woes, among them early retirement, the LCS ships would gain a potentially powerful new arrow in their mission profile quiver with the addition of the Knifefish anti-mine program.

The Navy lauds the program’s modularity. They state, “Knifefish’s common open systems architecture design and modularity allow for platform ﬂexibility and quick reconfiguration of the mission package to respond to evolving and dynamic mission requirements.” The platform can essentially be “retrained” by updating its software to identify new mine threats as they arise. “Planned block upgrades will improve its sensors and automated target recognition software to keep pace with mine threats.”

Although the Marine Mammal Program has used a wide range of animals at different times—including various seals, species of dolphins, and small whales—the two animals that are primarily trained are California sea lions and bottlenose dolphins.

The animals are primarily used for identifying and marking underwater naval mines, but they’ve also been trained for use in recovery operations and as underwater harbor sentries. These missions could also be done by robots—robots who need only an occasional battery refill.

General Dynamics, which provides engineering support for the Navy’s Knifefish system, is set to get an additional $13.6 million for continued program support. This comes on top of the initial $9.2 million contract that General Dynamics received for the program from the Navy.

The program is intended to be completed by September of next year, after which full-rate production will begin in 2022. The Navy has expressed interest in purchasing a total of thirty Knifefish systems: twenty-four of which will support Littoral Combat Ship operations, and six of which will be used in other ships that may face a threat from naval mines.