Is the U.S. Navy Going to Fight 'World War I' Against China? 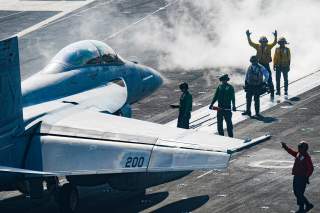 In a sense the Western Pacific today feels like the Western Front during World War I. When the guns of August rang out in 1914, the combatants fervently believed they would steamroll their antagonists through firepower, maneuver, and fighting spirit—much as the Prussian Army had steamrolled the French Army during the Franco-Prussian War of 1870-1871, encircling French forces at Sedan and deposing the French emperor.

Past exploits in ostensibly similar circumstances, it seemed, ratified present strategy and operations.

More than that, the conviction that past triumphs could be replicated gave rise to what the midcentury American strategist Bernard Brodie depicts as a tyranny of “maxims.” Before 1914, for instance, the French high command insisted men could overcome fire through indomitable élan. Sufficiently motivated fighting men could ride out artillery and machine-gun barrages, charge onward, and surmount fixed defenses. Advances in weapons technology be damned.

Now, maxims go beyond doctrine. Doctrine is indispensable to armed forces. It explains how the institution transacts business. But doctrine is, or should be, fungible. Institutional overseers revise it to keep up with changing times, surroundings, and technology. Maxims are dogma. Entrenched precepts resist revision as minds held captive by them reject unwelcome information—information that contradicts accepted verities. Oftentimes it takes bitter experience to falsify maxims.

They have to be debunked with extreme prejudice. Martial maxims, then, are seldom amended in an orderly fashion as new information comes in. They have to be shattered to clear away mental underbrush, allowing for reassessment and adaptation to new times and settings. Sobriety takes hold after the shock.

Now, the military maxims shaping battlefield operations in World War I weren’t always wrong. In fact, the expected war of fire and movement happened in the East, where vast geographic space lent itself to free-range fighting. The German Army drove Russia out of the war by late 1917 amid the tumult of revolution. The West was another story. By 1915 the Allied and Central Powers armies fought to a standstill on the compact battleground known as France—confounding prewar expectations.

To be fair, the dopey generals lampooned in the BBC series Blackadder, who mindlessly ordered soldiers “over the top” into the maw of enemy gunfire, are a caricature. Rather than keep sending wave after wave of soldiers to break themselves against gunnery barrages and fortified emplacements, by 1918 military folk had experimented with new methods and implements meant to evade the brunt of hostile firepower—achieving tactical goals while sparing lives. Some were ingenious.

For example, tanks provided armored shelter for crews striving to puncture enemy lines. Tactics such as rolling artillery barrages supplied advancing infantrymen with a protective screen, bolstering their chances of a breakthrough. The German Army dreamed up the concept of “stormtroops,” small units that infiltrated through enemy lines rather than batter them down. Stormtroopers would seep through weak spots in the defense rather than mount frontal assaults against strongpoints.

Newfangled methods and weapons scored notable successes during the great spring offensives of 1918, when German commanders sought to wring surrender from France and Britain before America could build up insuperable military might in Europe. Thankfully for the Allies, the German push came too late and fell short—preparing the ground for a decisive counteroffensive that fall. The result, however, does not invalidate the German effort to bypass strength and exploit weakness.

Berlin hit on the right principle. It just did too little, too late to put principle into practice. A lesson resides therein.

How does today’s Western Pacific compare to the endgame on the Western Front? There’s one welcome difference. Unlike the Great War combatants, the U.S. armed forces have liberated themselves from shopworn ways of doing things without suffering a catastrophic defeat. If a tyranny of maxims prevailed after the Cold War, the tyrant has been overthrown. Officialdom is revising strategy founded on the old maxim that America ruled sea and sky. The establishment accepts the new normal of embattled seas.

Now the similarities. Like their forebears a century ago, military chieftains are predicating their new combat approach on dispersing forces in space while concentrating fire at scenes of impact; on evading or blunting enemy firepower, chiefly from China’s People’s Liberation Army (PLA); and on misleading likely foes in the quest for victory at acceptable cost. U.S. maritime forces will spread out, constructing an array of light, cheap, manned and unmanned shipping to carry sensors and weapons.

Scattering capability among a multitude of winsome platforms rather than piling it onto big, bulky, pricey multi-mission combatants limits the damage to the force as a whole when a single platform is lost in battle. A small, single-mission ship may succumb to enemy action; the fleet goes on. If successful the force insinuates itself into the Western Pacific rather than forcing entry—much as stormtroop units sought to insinuate themselves into Allied rear areas rather than mount head-on assaults.

Get into an opponent’s backfield and you can play havoc with the opponent’s strategy—foiling its aims. U.S. forces could thwart PLA commanders’ strategy by arriving off Taiwan, or the Senkaku Islands, or some other hotspot bearing meaningful combat power. A resilient force stands a better chance of emerging a triumphant force. This idea constitutes the core of what U.S. Navy prelates have taken to calling “distributed lethality,” a.k.a. “distributed maritime operations.”

Distributed operations refuse to pit strength against strength. Like the innovations on display in 1918, dispersal circumvents defenders’ strength while seeking out frailty. It abjures throwing men against fire.

So much for the logic behind reorienting U.S. Pacific strategy. It’s sound. Are the navy, fellow armed services, and Congress fielding the ships, planes, and ordnance necessary to prosecute scattershot yet cohesive operations? No, says the Washington, DC-based Center for Strategic and Budgetary Assessments (CSBA). The material dimension trails the intellectual dimension of strategy. A new CSBA report urges haste. The surface fleet in particular needs revamping.

The sea-skimming force, say the authors, needs a host of new kit pronto. “Optionally manned” corvettes, unmanned craft toting offboard sensors or extra magazine space, directed-energy weapons to counter hostile anti-ship missiles—CSBA’s list of essential acquisitions goes on and on. Read the whole thing. The German Army of 1918 offers a cautionary tale about the perils of being too slow to develop new hardware to put new concepts into effect. Let’s not risk a German fate.