The U.S. Navy Had to Go Fishing for a Super Hornet Jet 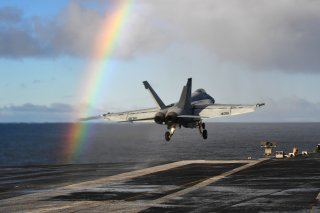 The U.S. Navy successfully recovered an F/A-18E Super Hornet fighter jet that the Navy lost at sea earlier this summer. The jet fell off the USS Harry S. Truman while the aircraft carrier was underway in the Mediterranean Sea.

The U.S. Navy statement covering the recovery reads as follows:

The U.S. Navy statement also explained that the fighter jet “was recovered using a CURV-21 remotely operated vehicle to attach specialized rigging and lift lines to the aircraft. A lifting hook was attached to the rigging to raise the aircraft to the surface and hoist it aboard Everest.”

The aircraft was delivered to a nearby military installation where it will be transported to the United States.”

Although the F/A-18 Super Hornet platform is not the most advanced naval fighter in the United States, the jet nonetheless contains many electronic components that the United States would like to keep secret, necessitating the jet’s recovery.

Last year a British F-35B Joint Strike Fighter also fell into the Mediterranean, necessitating a quick salvage to prevent a foreign country’s recovery of the plane or parts of its advanced components.

"The rapid response of the combined team, including SUPSALV and Phoenix International personnel, allowed us to conduct safe recovery operations within 27 days of the incident," said Lieutenant Commander Miguel Lewis, the U.S. Sixth Fleet salvage officer.

He added that the "task tailored team operated safely and efficiently to meet the timeline. The search and recovery took less than 24 hours, a true testament to the team's dedication and capability."

Though fighters like the Super Hornet are "navalized" to better withstand the high-stress nature of carrier landings and resist the corrosive effects of a salty ocean operating environment, the jet is highly unlikely to be recoverable and fly again due to its extended dip in the ocean.

The U.S. Navy can now rest a bit easier knowing that one of their Super Hornets—a fourth generation but nonetheless advanced fighter jet—is off the ocean floor and back in the United States, safe from prying eyes.