The U.S. Navy Has Orca Robot Submarines on the Way that Could Transform Naval Warfare 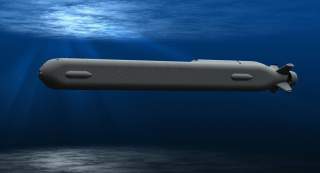