The U.S. Navy Just Commissioned a Bunch of Sea-Base Ships 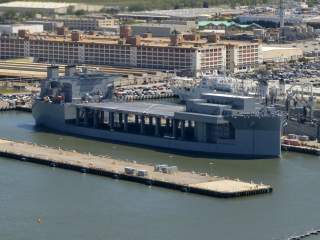 The U.S. Navy has announced it permanently will commission into front-line service all five of the expeditionary sea-base ships it plans to acquire.

The sea-base ships, or ESBs in Navy parlance, previously were non-combatant vessels under the administration of the quasi-civilian Military Sealift Command. Skeptics wondered aloud whether the Navy was commissioning the ships in order artificially to inflate the Navy’s ship count.

“The Navy originally planned to operate the ships as USNS support ships under MSC, with the ability to temporarily commission them as warships if needed for a specific operation,” Megan Eckstein explained at USNI News.

U.S. law protects military forces conducting lethal operations overseas during wartime. It doesn’t protect U.S. civilians in the same way. Hence the Navy’s decision temporarily to commission the ESB Lewis B. Puller when that ship deployed to the Persian Gulf in 2017. She became USS Lewis B. Puller.

“The decision now applies to the entire class,” Eckstein wrote.

The ESBs are huge, floating bases. 785 feet long and displacing 90,000 tons of water, they can accommodate hundreds of special operations forces, mine-warfare crews, drone-operators and other specialists along with these troops’ boats, helicopters and drones.

During a major war, the ESBs could carry landing craft and support amphibious groups sending Marines ashore to hostile beaches.

It’s easier for the Navy if all the ESBs permanently are in commission, Navy spokesman Lt. Tim Pietrack told Eckstein. “This re-designation provides combatant commanders greater operational flexibility to employ this platform in accordance with the laws of armed conflict,” Peitrack said.

“Prior to commissioning, the ESB class was limited to defensive actions during times governed by the laws of armed conflict,” Peitrack added. “Post-commissioning, these ships have greater mission flexibility throughout the [range of military operations].”

Of course, the Navy is in the midst of a heated debate over its plans to grow from today’s 290 front-line ships to 355 by the 2030s. Navy leaders in recent months have tried to dial back expectations for the fleet’s rapid growth, calling a major expansion unaffordable under current and projected budgets.

Commissioning the EBSs instantly grows the fleet to 295 front-line ships by taking five ships away from Military Sealift Command. The Navy achieved a similar result in 2014 when it abruptly redesignated 10 Cyclone-class patrol boats, a catamaran transport and two hospital ships as “battle-force” vessels, thus adding them to the official warship-count.

“We periodically assess the rules of how we count ships, and these changes better reflect the demands of our combatant commanders and the current mission requirements of our Navy’s battle force,” Ray Mabus, then the Navy secretary, told USNI News.

“These changes provide us with the flexibility we need to ensure we have the right ships, with the right capabilities, in the right location, to execute what is required of our maritime forces under the Defense Strategic Guidance.”

Still, many observers were skeptical. And Congress in 2015 mandated that the Navy reverse the 2014 commissionings.

"The term 'combatant and support vessel' means any commissioned ship built or armed for naval combat or any naval ship designed to provide support to combatant ships and other naval operations,” lawmakers explained. “Such term does not include patrol coastal ships, non-commissioned combatant craft specifically designed for combat roles or ships that are designated for potential mobilization."

But ginning the numbers clearly isn’t the point in the ESBs’ change in status. A Navy spokesman told USNI News that the fleet in 2017 commissioned Puller “because of the nature of the evolving threats in the [Middle East] region” and that the “permanent conversion to USS reduces any ambiguity of ESB-3’s status and eliminates the administrative distraction that a temporary conversion creates while streamlining the command and control process.”

That logic holds today. Yes, commissioning the sea-base ships helps the Navy grow. But that’s not really the point. Legal protection is the point.