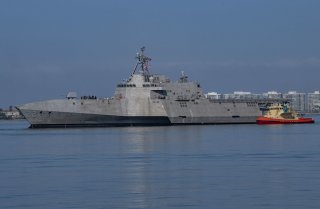 In the world of professional football there had long been a rivalry between the NFL’s (formerly) San Diego (now Los Angeles) Chargers and the Kansas City Chiefs, but the city that is known as "the birthplace of California" is now the home port for the USS Kansas City (LCS 22), the twenty-first Independence-variant littoral combat ship to be commissioned into the U.S. Navy. The warship arrived in its new homeport at the end of last month.

“I am extremely proud of all the hard work the crew has done to complete the sail around and prepare us to officially join the fleet on commissioning day,” said Cmdr. RJ Zamberlan, Kansas City’s commanding officer when the ship arrived in San Diego. “We are honored and excited to represent the Navy, the nation, and our namesake, as well as fulfill the ship’s motto, ‘United We Stand, Divided We Fall.’”

LCS 22 was designed and built by Austal USA in collaboration with General Dynamics in Mobile, Alabama. Prior to its departure from Mobile, the ship’s crew conducted a twenty-one-day restriction in movement (ROM) in accordance with the U.S. Navy pre-deployment guidelines.

Last Saturday, the Navy commissioned Kansas City administratively via naval message, due to public health safety and restrictions of large public gatherings related to the novel coronavirus pandemic and transitioned the ship to normal operations.

“This Independence-variant littoral combat ship will continue our proud naval legacy and embody the spirit of the people of Kansas City,” said Secretary of the Navy Kenneth J. Braithwaite. “I am confident the crew of the USS Kansas City will extend the reach and capability of our force and confront the challenges of today’s complex world with our core values of honor, courage and commitment.”

USS Kansas City is the second ship to be named for Kansas City, the largest city in Missouri—however, the name was originally assigned to a heavy cruiser that was under construction during World War II. Construction was canceled after one month due to the end of the war. The name Kansas City was then assigned to the Wichita-class replenishment oiler AOR-3 in 1967, and that ship saw service in the Vietnam War and Operation Desert Storm before being decommissioned in 1994.

The LCS is a fast, agile, mission-focused platform that is designed to operate in near-shore environments, but also capable of conducting open-ocean tasks and addressing twenty-first-century coastal threats including submarines, mines and swarming small craft. The LCS is also capable of supporting forward presence, maritime security, sea control and deterrence.

However, the Navy has dealt with issues with the first four of its LCS vessels, and earlier this year the Navy’s budget director suggested it would cheaper to decommission the vessels than to upgrade and repair the warships. After spending $30 billion over a period of around two decades, the U.S. Navy has managed to acquire just thirty-five of the thirty-thousand-ton-displacement vessels.

One issue is that the LCS warships aren’t as crucial for inshore naval warfare as one suggested. The “program has fulfilled little if any of its early promise yet could provide value in the future if put to creative tactical use.”

While the modular design of the ship was hyped up, it lacked its striking potential once its over-the-horizon anti-ship missile that constituted its main battery for surface warfare was canceled. Instead, the Navy substituted Longbow Hellfire missiles, which while lethal had an effective range of just 6.84 miles—something that was seen as a problem as anti-ship missiles can now strike targets from hundreds of miles.

Efforts to upgrade the vessels have included installing the Naval Strike Missile, a thirteen-foot-long, sea-skimming missile that would become the LCS’s most powerful weapon. In addition, the Navy has explored ways that its Fire Scout drones could be employed on the LCS. The Fire Scout drone is an indispensable part of the ship's surface, countermine and anti-submarine warfare missions; it is equipped with advanced mine-hunting sensors, aerial surface scanners and target-locating Electro-Optical/Infra-Red cameras.

With these upgrades it is hoped that the Navy can right the course for the LCS—but already it has canceled twenty future LCSs in place of twenty new missile frigates.