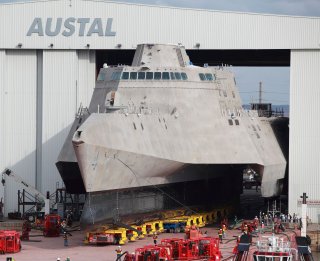 Alabama and Georgia are two states that have an ongoing interstate rivalry—with much of it based on college football—but now the southern states are linked as the future littoral combat ship (LCS) USS Savannah (LCS 28) was commissioned last week in Mobile.

“Today we christened the sixth USS Savannah following an outstanding record of service named for a great American city,” said Secretary of the Navy Kenneth J. Braithwaite during Saturday’s commissioning ceremony. “In so doing we move one step closer to welcoming a new ship to Naval service and transitioning the platform from a mere hull number to a ship with a name and spirit. There is no doubt future sailors aboard this ship will carry on the same values of honor, courage and commitment upheld by crews from earlier vessels that bore this name.”

This will be the sixth U.S. Navy vessel named in honor of the city of Savannah and is the twenty-eight LCS and the fourteenth Independence-class variant. Littoral combat ships, which consist of two variants—the Freedom-variant, which are being built by Lockheed Martin in Marinette, Wisconsin with odd-number hulls; and the Independence-variant, which is led by Austal USA in Mobile, Alabama with even-numbered hulls.

“The christening of a ship is an important milestone and an appropriate time to reflect on all of the hard work that goes into the construction of each and every vessel,” said David Singleton, Austal Limited chief executive. “Congratulations to everyone at Austal USA and thank you for your tremendous productivity and efficiency in the delivery of the LCS program.”

The LCS are highly maneuverable, lethal and adaptable warships that were designed to support focused mine countermeasures, anti-submarine warfare (ASW) and surface warfare missions. The LCS also integrates new technology and capability to support current and future missions from deep water to the littorals.

The LCS is now the second-largest U.S. Navy surface ship in production.

Five LCS vessels are currently under various stages of construction at Austal USA’s Mobile, Alabama shipyard including the future USS Mobile (LCS 26), which is preparing for sea trials. Meanwhile assembly is underway for LCS 28 and USS Canberra (LCS 30). In addition, modules for the future USS Santa Barbara (LCS 32) and USS Augusta (LCS 34) are also under construction in the module manufacturing facility (MMF). The future USS Kingsville (LCS 36) and USS Pierre (LCS 38) are also under contract.

Changing Duties for the LCS

The U.S. Navy remains committed to the LCS program—and the modular warships are now being equipped with upgraded weapons needed for major, great power warfare.

The role of the vessels has evolved over the years from when it was initially conceived to be used as a purely shallow-draft warship intended for coastal or littoral regions. However, with the advent of a great-power warfare competition, U.S. Navy strategists have reconfigured the mission scope for the LCS program and this has included the addition of over-the-horizon missiles as well as anti-submarine and mine hunting systems.

The ship’s shallow draft allows it to hunt submarines, mines and enemy targets in areas not deep enough for deeper draft ships, and this enables coastal patrol and reconnaissance missions as well as a close-in mine-hunting ability.

There have been five U.S. Navy vessels named for the city of Savannah. The first was a coastal galley that provided harbor defense for the port of Savannah, 1799-1802; while the second was a frigate that served as the flagship of the Pacific Squadron and later took part in the American Civil War and actually was deployed off the coast of Georgia no less!

The third USS Savannah (AS 8) was launched in 1899 as the German commercial freighter, Saxonia. It was seized in Seattle, Washington, upon the outbreak of World War I, and the freighter was converted to a submarine tender and supported submarine squadrons in both the Atlantic and Pacific, from 1917-1926.

The fourth USS Savannah (CL 42) was a Brooklyn-class light cruiser commissioned in 1938, and she saw service during the Second World War and served through the entire Mediterranean campaign, receiving three battle stars for service. She served in the task force that carried President Franklin Roosevelt to the Yalta Conference in early 1945.

The fifth USS Savannah (AOR 4) was a Wichita-class replenishment oiler commissioned in 1970. AOR 4 earned one battle star and a Meritorious Unit Commendation for service in the Vietnam War. The oiler provided underway replenishment services in the Atlantic and Indian oceans until decommissioning in 1995.