The U.S. Navy Just Sent These Two Warships to the South China Sea 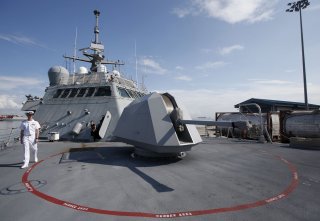 For the second time in a month the U.S. Navy sent warships to patrol in the vicinity of a mineral rights dispute between Malaysia and China in the South China Sea. The United States Navy’s 7th Fleet announced that last week the Independence-variant littoral combat ship USS Montgomery (LCS 8) and the Lewis and Clark-class dry cargo ship USNS Cesar Chavez (T-AKE 14) conducted presence operations in international waters and airspace near Panamanian flagged drill ship, West Capella.

The Panamanian vessel was conducting surveying operations in Malaysia’s exclusive economic zone for the Malaysian state oil company Petronas. It has been drawing attention from Chinese fishing vessels and Chinese Coast Guard ships for the past two months.

In a statement the U.S. Navy said that its presence was necessary to support transparency, the rule of law, freedom of navigation and oversight, which the Navy called the principles that underpin security and prosperity for the Indo-Pacific, so that all nations in the region may benefit.

“USS Montgomery’s operations with the USNS Cesar Chavez highlight the flexibility and agility of our naval forces in this vital region,” said Rear Admiral Fred Kacher, commander of the Expeditionary Strike Group 7. “Our forces fly, sail and operate in the international waters of the South China Sea at our discretion and in accordance with maritime norms and international law, demonstrating the wide range of naval capability we have available in the Indo-Pacific.”

Last month the U.S. Navy had deployed the USS America (LHA-6), an amphibious assault ship, along with the Ticonderoga-class guided-missile cruiser USS Bunker Hill (CG-52) and Arleigh Burke-class destroyer USS Barry (DDG-52) to the region as a show of force.

Breaking Defense noted that the U.S. Navy has taken to publicizing its operations in the South China Sea in the past months, likely as a show of commitment and strength while the crew of the USS Theodore Roosevelt recovers from the novel coronavirus in Guam.

“We are committed to a rules-based order in the South China Sea and we will continue to champion freedom of the seas and the rule of law,” said Adm. John Aquilino, commander of the U.S. Pacific Fleet as reported by USNI News. “The Chinese Communist Party must end its pattern of bullying Southeast Asians out of offshore oil, gas, and fisheries. Millions of people in the region depend on those resources for their livelihood.”

The Montgomery has been conducting operations, exercises and port visits throughout the region and working hull-to-hull with allied and partner navies to provide maritime security and stability, which the Navy has emphasized are key pillars of a free and open Indo-Pacific.

Kacher added that the presence of the Montgomery and Cesar Chavez in the South China Sea demonstrate the U.S. Navy’s continued commitment to the region. The U.S. 7th Fleet conducts forward-deployed naval operations in support of U.S. national interests in the Indo-Pacific area of operations. The 7th Fleet is the largest number fleet in the U.S. Navy and regularly interacts with 35 other maritime nations as a way to forge partnerships to foster maritime security, promote stability and to prevent conflict.