The U.S. Navy May Have a New Plan To Get Bigger 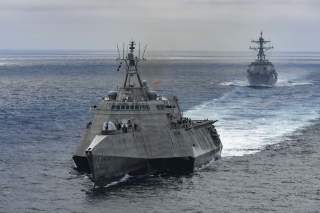 U.S. Defense Secretary Mark Esper has some ideas for how the U.S. Navy can expand from today’s 290 front-line ships to 355 over the next decade.

Esper told Defense News reporters Aaron Mehta and David Larter he is “fully committed” to a larger fleet. He said the key to growing the fleet is what he called “lightly-manned” vessels that require fewer crew than today’s ships do.

“We can go with lightly manned ships, get them out there,” Esper said. “You can build them so they’re optionally manned and then, depending on the scenario or the technology, at some point in time they can go unmanned.”

The Navy long has wanted to grow its “battle force” in order to keep pace with the fast-expanding Chinese fleet. For much of Barack Obama’s eight-year presidency, the goal was 308 ships. In 2016, Obama’s long-time Navy secretary Ray Mabus announced a new goal of 355 ships.

Pres. Donald Trump’s administration maintained that policy. The Navy had around 280 front-line ships when Trump took office in early 2017.

But one Congressional shipbuilding expert told The National Interest, on condition of anonymity, that quickly growing the Navy simply by buying new vessels "would be impossible."

Manufacturing and maintaining the new ships could cost as much as $23 billion a year, according to the Congressional Research Service. For years, the Navy’s annual shipbuilding budget has been around $15 billion.

Adm. John Richardson, the chief of naval operations, in a February 2019 conversation with reporters signalled lower expectations regarding fleet size. "In light of the new National Defense Strategy and changes in the security environment since that was put out, we’re doing a new force-structure assessment," Richardson said. "We’ll see where that goes."

The Navy signalled its intention to abandon the current fleet expansion in a December 2019 memo to the White House’s Office of Management and Budget. The memo acknowledges what experts long have warned. That the 350-ship plan would cost far more than the Navy realistically could expect to get from Congress over the roughly 20-year duration of the expansion.

The net result of the construction slow-down and early retirements would be a reversal of the fleet’s slow expansion since the Obama administration. The Navy’s battle force would decline from 290 ships in 2019 to 287 in 2025.

Esper’s plan could represent one way of reversing this shrinkage. It’s consistent with concepts that experts in recent months have proposed.

The Washington, D.C. Center for Strategic and Budgetary Assessments in a January 2020 report urged the Navy to cut back on destroyer-production and shift the savings into developing optionally-manned armed corvettes -- “DDCs,” they call them -- that can accommodate small crews or sail autonomously.

Esper’s plan raises many questions, not the least of which concerns the Navy’s fleet of 11 nuclear-powered aircraft carriers. The sailing branch wanted to grow to 12 carriers as part of Mabus’s expansion plan, but the $13-billion cost of new flattops has slowed construction.

Experts pointed out that, under current planning, the Navy won’t get to a dozen carriers until the 2060s. If the Navy shifts to smaller, lightly-manned vessels, would it also cut back on flattops?

Esper said he’s not sure. “This discussion often comes down to a binary: Is it zero or 12?” Esper said. “First of all, I don't know. I think carriers are very important. I think they demonstrate American power, American prestige. They get people's attention. They are a great deterrent. They give us great capability.”

Esper hinted that the Navy could add more small light carriers to the mix. The fleet’s America-class amphibious assault ships already are functioning as light carriers by embarking a dozen or more F-35B stealth jump jets.