The U.S. Navy Is Practicing Sweeping the Atlantic Ocean of Russian Submarines 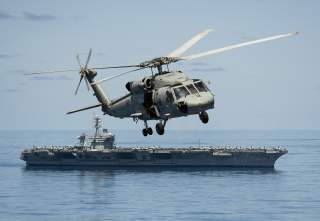 Russian submarines are getting more aggressive in the Atlantic Ocean. Deploying in greater numbers as far as the U.S. East Coast, Russian attack submarines could threaten U.S. military shipping hurrying to reinforce Europe in the event of war.

In response, the U.S. fleet in March 2020 is doing something it hasn’t done in decades. Practicing to protect convoys.

This convoy operation is allowing U.S. 2nd Fleet, Naval Forces Europe and Military Sealift Command to work command and control on both sides of the Atlantic to deliver gear by sea – replicating the massive sealift efforts that took place to support the European theater in World War II, and what would have to happen again if the U.S. were to support a major conflict in Europe in the future.

A recent Russian undersea surge underscored the threat submarines could pose to American shipping. The Russian navy in mid-October 2019 sortied eight subs in the country’s biggest undersea exercise since the Cold War.

The path is being cleared for the roll-on/roll-off USNS Benavidez, along with U.S.-flagged merchant vessels M/V Resolve and M/V Patriot, which departed Beaumont, Texas Feb. 24 to deliver equipment to the U.S. Army’s Defender-20 exercise in Europe.

The ships are carrying gear for the 1st Armored Division, including Abrams tanks, Bradley Fighting Vehicles and other heavy armor.

The Pentagon in recent years has begun to worry about its ability to resupply far-flung forces during a major conflict. In September 2019, Military Sealift Command conducted a “stress test,”  activating 33 sealift ships on both U.S. coasts.

As part of the exercise, the five East Coast roll-on/roll-off cargo ships simulated an unescorted convoy moving through waters where enemy submarines and sea mines posed a threat.

That training belied a serious shortage of surface warships that could function as escorts. In October 2018, U.S. Maritime Administration head Mark Buzby said the Navy admitted it wouldn’t always be able to escort sealift ships during a war with Russia or China.

The good news for the Americans is that the Russian fleet can’t possibly keep up its current high rate of submarine deployments. By the late 2020s or early 2030s, the Russian navy could lose all but 12 of its existing subs as the vessels reactors wear out.

If Moscow succeeds in producing all the new Borei- and Yasen-class boats it plans to acquire, the future submarine fleet could top out at just 28 boats. Half its current strength.

“Eventually a much smaller number of modern, more capable boats will carry the burden of fulfilling [Russian president Vladimir] Putin’s grand plans of Russia remaining a maritime superpower capable of aspiring to a global presence under the sea,” naval historian Iain Ballantyne told The National Interest.