The U.S. Navy Is Ready for Trouble in the South China Sea or Near Taiwan 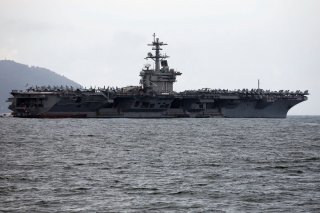 The U.S. Navy is preparing for expansive two-carrier attacks in the Pacific by connecting the USS Theodore Roosevelt and USS Nimitz Carrier Strike Groups for combined operations near the Taiwan Strait and the South China Sea.

The exercise, which is, of course, not planning any attacks or specific war moves, is intended to ensure that U.S. carrier power-projection is ready, capable and highly functional should it need to launch coordinated combat operations in the area.

Navy commanders are referring to this a specific effort to sustain “readiness” in a highly “pressurized region,” of course acknowledging the current U.S.-Chinese tension.

“This is a great opportunity for us to train together in a complex scenario,” Rear Adm. Doug Verissimo, commander of Carrier Strike Group (CSG) 9, said in a Navy report.  “By working together in this environment, we’re improving our tactical skills and readiness in the face of an increasingly pressurized region and COVID-19.”

While not the first time the Navy has conducted dual-strike group operations in the Pacific, the maneuvers are not without technical and strategic challenges. Multi-carrier attack succeeds by virtue of elaborate networking, command and control and air-confliction efforts, while also delivering a massive advantage to maritime attack options by, essentially, doubling firepower, surveillance potential and weapons capability.

Not only do these types of operations extend the Navy’s ability to attack inland targets to a larger extent, extend target-searching dwell time and enable coordinated multi-platform strikes, but they also greatly improve destroyer-and-cruiser launched missile attacks. Each Carrier Strike Group consists of a carrier, cruiser and two destroyers, bringing a large, integrated combination of sea-launched assets.

For instance, a destroyer could launch Tomahawk missiles at predetermined land targets from long distances to soften up or prepare a land target area for approaching F-18s or F-35Cs. Concurrently, destroyers could protect the carriers from ballistic missile attacks or even approaching enemy aircraft attacks with SM-3, SM-2 or SM-6 missiles fired from Vertical Launch Systems. Also as part of this kind of weapons-configuration, Navy destroyers and cruisers are armed with EW systems, lasers and a range of closer-in air defense systems as well, such as SeaRAM, Rolling Airframe, Close-in-weapons systems and Evolved Sea Sparrow Missiles to fight off anti-ship missiles, small boats or approaching surface vessels.

Given this tactical equation, it seems self-evident that multi-ship networking and integrated command and control would be needed to optimize offensive and defensive combat options. One ship in the fleet might use radar to identify faraway targets before passing information to another ship or carrier commander working on target coordination for air-launched attacks. These kinds of networked operations are increasingly possible as technology evolves, given that the Navy is in the process of deploying far-more sensitive radar, new attack systems, longer-range weapons and sensors and more precise missiles able to change-course in flight as needed. The Maritime Tomahawk, for instance, is an emerging weapon now able to destroy moving targets, a development which massively expands ship-commanders’ attack options. Not only can Tomahawks destroy fixed inland targets from distances as far as nine hundred miles, but the missiles can now take out moving surface ships from similar distances. Also, an ability to hit a moving surface and land targets is now possible with other deck-fired weapons as well, such as an ESSM II or SM-6. This changes the tactical equation as it offers commanders new options with which to conduct open, blue-water warfare on the open sea against moving surface ships, freeing up air fighters potentially more vulnerable to counterfire from enemy ships.