The U.S. Navy Is Ready For War (Coronavirus, Or Not) 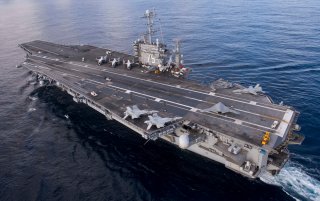 The U.S. Navy is sending a message that, despite coronavirus challenges, the service is still ready for a major war and equipped to defend the homeland.

The service will be sailing the entire USS Harry Truman Carrier Strike Group and flying Air Force attack planes to destroy an enemy bomber target off U.S. shores as part of a multilateral homeland defense exercise in the Atlantic Ocean, led by U.S. Northern Command.

“Leading complex multi-combatant command operations across multiple domains demonstrates our readiness to defend our homeland regardless of COVID-19,” General Terrence J. O’Shaughnessy, commander of NORAD and USNORTHCOM, said in a Navy report. “The high-end training we are conducting enables integration between strategic-level organizations who all play a significant role in the most important mission for our nation—defending our homeland.”

Carrier Strike Groups armed with Aegis-radar equipped cruisers capable of ballistic missile defense operations, and a collection of Navy surface strike assets will coordinate with Canadian and U.S. air attack and defense assets such as Canadian F-18s, F-15s and carrier-launched F/A-18s. All of these coordinated air assets will extend their defensive range with a KC-135 Stratotanker refuelers. The various nodes used for the coordinated exercise will be connected with a LINK 16 datalink, the Navy report said.

Interestingly, the exercise will put integrated homeland defense weapons to the test, by using a B-1B Lancer long-range bomber to “simulate an adversary role.” Such a scenario challenges U.S. air and sea assets by forcing ISR, targeting and counterattack missions simultaneously. An aircraft or ship-based radar would first have to see the approaching bomber, before a human decision maker could decide which method of defense might be best suited for the threat.  Perhaps an F-15 would be sent forward to engage? An F-18? Or maybe forward-operating drones could paint targets for deck-mounted ship guns or interceptor missiles? Regardless of which components of the Navy’s layered defenses are utilized, the Navy report emphasizes that satellite systems, and Space war technologies in general, will provide a key element to the exercise.

“Today, there is not a joint operation that doesn’t integrate space capabilities—the pervasiveness of these capabilities and the information they provide is a key ingredient to how American forces operate with unmatched speed, precision, and lethality,” Gen. John W. “Jay” Raymond, USSPACECOM commander and USSF Chief of Space Operations, said in the Navy report.