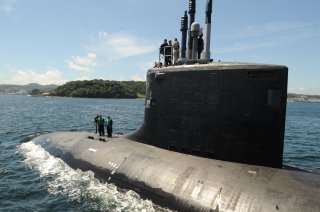 The U.S. Navy's Submarine Force took delivery of its newest attack submarine, the future USS Oregon, on February 26. It was the twentieth Virginia-class submarine to be co-produced at General Dynamics Electric Boat (GDEB) and Huntington Ingalls Industries – Newport News Shipbuilding through a joint agreement.

In addition, the future USS Oregon was the eleventh Virginia-class boat delivered by GDEB and the second Block IV configured submarine.

"Oregon is in excellent condition and the captain and crew have expertly taken the ship through her paces,” said Capt. Todd Weeks, the Virginia-class program manager who rode the boat during her sea trials.

The delivery of this Virginia-class submarine was the culmination of nearly ten million work hours under the exacting standards imposed by Naval Sea Systems Command and Naval Reactors, the Naval Sea Command announced.

"Each organization works tirelessly with the others focused on getting ships to sea as the first step in ultimately arriving at its Squadron and homeport where it becomes a vital asset to the nation," added Captain Weeks.

The result is a flexible, multi-mission platform. The Virginia-class submarine can even be used to deliver special operations forces support or participate in mine warfare roles.

The future USS Oregon is the third U.S. Navy vessel to honor the Beaver State. The first USS Oregon was a brigantine ship purchased in 1841 and used for exploration until 1845, while the second USS Oregon was commissioned on July 15, 1896.

As noted in a recent Congressional Research Service report, the U.S. Navy has been procuring Virginia class nuclear-powered attack submarines since 1998, and a total of thirty-four had been procured through 2021.

In addition, since 2011, the Virginia-class boats have been procured at a rate of two per year.

However, due to the COVID-19 pandemic, the ten remaining Block IV submarines had been delayed by four months on average, though program officials stated that Block V has a schedule margin to absorb some Block IV delays. USS Oregon had been delayed by about sixteen months, making it nearly two years since the Connecticut shipyard delivered a submarine.