The U.S. Navy Wants 12 Aircraft Carriers. Here Is How They Plan To Do It. 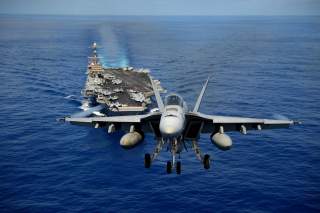 Carrier defenses and attack weapons are taking on added importance due to the reality that, with the emergence of new Chinese and Russian fighters such as the Su-27, US aircraft can no longer assume air supremacy.

“New generations of fighters, notably the Su-27, its derivatives, and even newer designs from Russia and China, have eroded the technical advantages traditionally enjoyed by American aircraft,” the Naval War College Review writes.

Enhancing the effectiveness of a carrier-launched unmanned aerial refueler, such as the Navy’s MQ-25 Stingray, introduces an unprecedented tactical advantage specifically able to address the carrier “operating range” issue. An ability to refuel while in flight massively extends a carriers attempt to further project power, while remaining at safer stand-off distances. If the combat radius of an F-18 or F-35, on one fuel tank, reaches 300 to 400 miles or so, the aircraft will have to turn around at a certain distance from its carrier. However, if an attack platform can double that range, it can naturally travel much farther, enabling much more “dwell time” when it comes to attacks and provide the option to strike targets farther inland or from greater distances.

“Unmanned aircraft offer double or triple the range and endurance of manned aircraft. Moreover, without the need to accommodate a human, their form can be considerably more stealthy, and their operations do not need to take into account crew-rest factors, at least to the extent that they do in manned aircraft,” Rubel writes.

In effect, unmanned systems and drone refuelers such as the MQ-25 might enable carriers to successfully project power, while operating outside the hit-ranges of Chinese anti-ship missiles.

The F-35C, naturally, will bring a new array of attack options for the Carrier Air Wing, not to mention an unprecedented measure of aerial Intelligence, Reconnaissance and Surveillance (ISR). Drawing upon new sensor and targeting technology, the aerial attack range will be significantly changed, and stealth technology will enable air attack to operate in higher threat environments, such as areas containing advanced air-defenses. The arrival of the F-35C is, by all estimations, expected to change the paradigm for carrier-air attack.

Perhaps with this in mind, the Navy’s 2020 budget request asks to nearly double the amount of F-35Cs from 9 up to 16.