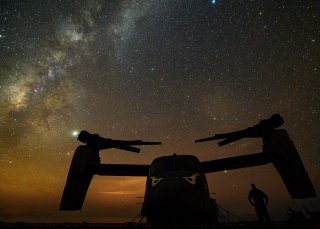 The U.S. Navy has for the first time landed its new Osprey variant on an aircraft carrier, marking a long-planned and significant shift toward using the tiltrotor aircraft for the Carrier-On-Board Delivery mission now performed by the well-known C2 Greyhound aircraft.

In development for many years, the new CMV-22B Osprey aircraft has been specially engineered for Navy carrier operations with increased range, communications and night-landing technology.

A Navy report explained that the so-called Titans of Fleet Logistics Multi-Mission Squadron 30 landed the CMV-22B on the USS Carl Vinson, the carrier on which the new Navy Osprey is slated to deploy next year.

The Navy CVM-22B Osprey variant expands the combat radius beyond the 450 nautical mile distance of the MV-22 Marine Corps Osprey to enable as many as 1,150 miles of flight from shore to ship using extended fuel tanks. As for the mission scope, the new Osprey will conduct VIP transport, humanitarian relief and regular efforts to deliver food, spare parts and sailors aboard carriers. The aircraft, which can reach speeds as high as 280mph in airplane mode, can also of course connect amphibious assault ships more fully to carriers, as it is capable of helicopter-like vertical take-off and landing and does not rely upon a catapult or runway to operate. The CVM-22B is built with a reconfigurable cargo bay which can create space for twelve stretchers for MEDEVAC evaluation and transport.

Perhaps of greatest significance, the Navy Osprey is engineered with an ability to better conduct missions at night, a scenario that greatly expands its mission envelope. Several years ago, Osprey pilots conducted a series of maneuvers with an MV-22 tilt-rotor aircraft onboard the USS Carl Vinson—in preparation for a Navy Osprey variant to reach operational status. Exercises included delivering supplies, unloading faster with rollers, and performing the range of missions now executed by the Grumman C-2 Greyhound. Given its advanced technologies and vertical maneuvering ability, the Navy Osprey is expected to be much more effective at conducting dangerous missions than a C-2 Greyhound, quickly loading and unloading cargo and operating at night. While Ospreys tend to avoid transferring passengers in more risky, night-time operations, they do conduct MEDEVAC and logistics missions at night. Osprey crews go through specific night-time ocean survival training in preparation for operating at night and in dangerous conditions, Navy officials have told the National Interest.

Operating at night vastly increases the possibility of the Osprey to conduct more sensitive, high-threat missions as traveling in darkness makes the aircraft harder for enemies to detect. This improves survivability as well in a significant way, given that while likely armed with .50-Cal machine guns and possibly other weapons, the Navy Osprey will primarily conduct combat missions. Nighttime operations are also much more challenging because reduced visibility also means pilots need to rely more on sensors, avionics and instrumentation to navigate fast-changing conditions and land in turbulent seas.

The extent to which the Navy Osprey variant might be armed and other potential developments are still in flux. But its ability to operate at longer ranges at night with extra fuel tanks can increase combat range without having to expose a refueler to enemy fire or detection in high-threat areas is notable. This naturally also creates the possibility that a Navy Osprey could conduct troop delivery missions for special operators, the U.S. Marines or other forces pursuing nighttime clandestine hit-and-run assaults.