The U.S. Navy's Latest Aircraft Carrier Will Be Delayed in Delivery 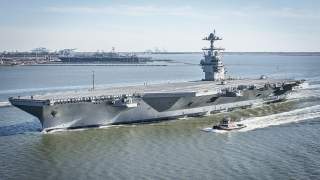 The Navy can't afford many more delays with Ford. The sailing branch has proposed to decommission the 21-year-old Nimitz-class carrier USS Harry S. Truman in the early 2020s, just halfway through her planned service life, in order to free up billions of dollars for newer ships including Ford-class carriers.

The U.S. Navy has delayed by three months the delivery of the first Ford-class supercarrier. It's the latest setback for a high-tech new ship that's supposed to be the centerpiece of the Navy's future fleet, but which has proved to have serious design flaws.

The delay also could weigh on the Navy's controversial proposal to decommission one older carrier decades earlier than the fleet previously had planned.

The Navy can't afford many more delays with Ford. The sailing branch has proposed to decommission the 21-year-old Nimitz-class carrier USS Harry S. Truman in the early 2020s, just halfway through her planned service life, in order to free up billions of dollars for newer ships including Ford-class carriers.

But decommissioning Truman would drop the carrier fleet to a low of nine vessels in the 2030s, despite a legal requirement for the Navy to operate at least 11 carriers at all times. If the fleet loses Truman and can't buy Fords fast enough owing to technical problems with the new ships, the carrier force could shrink even further.

Congress has questioned the Truman proposal and could force the Navy to continue operating the vessel in order to keep up carrier numbers. That move becomes more likely as Ford's problems pile up.

Rep. Rob Wittman, a Virginia Republican who sits on the House's seapower subcommittee, told Navy officials they shouldn't shrink the carrier fleet while the Chinese navy is growing its own force of flattops. China has one carrier in service and is building at least two more.

"Why would then we retire the Truman 25 years early in relation to the demands that we see around us and with our adversaries building carriers at a pretty brisk pace?" Wittman asked.