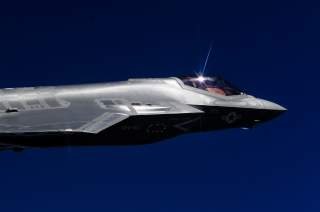 The U.S. Navy’s newest aircraft carrier won’t be able to deploy with the service’s newest warplane. At least not at first.

And Congress is unhappy about that, according to Ben Werner at USNI News.

The House Armed Services seapower and projection forces subcommittee included in its version of the 2020 National Defense Authorization Act a ban on the Navy taking delivery of the Ford-class carrier John F. Kennedy unless the carrier can deploy with F-35C Lighting II stealth fighter, Ben Werner reported for USNI News.

The Navy decided to omit the gear for the F-35 in order to keep Kennedy under the $11-billion cost cap that Congress has imposed on the ship’s construction. The sailing branch plans to christen Kennedy in late 2019 and add F-35-compatibility at a later date.

The Navy in February 2019 declared its first F-35C squadron to be combat-ready.

“Cost caps imposed by Congress on the Ford-class program to keep the price of these ships from escalating have accomplished the opposite effect,” a committee staff member told Werner, “with the Navy accepting delivery of unfinished carriers and intending to pay more money later on to add critical capabilities in the future.”.