The U.S. Navy's Littoral Combat Ship: Destined to Die in a Fight? 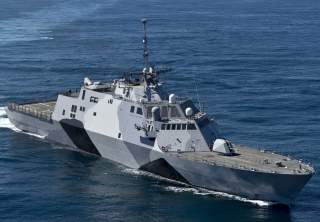 Referred to as the Surface-to-Surface Missile Module, the weapon is being prepared as part of an integrated suite of combat technologies for the LCS.

Destroying enemy helicopters on the open sea, hitting attacking enemy drones and countering opposing surface ships from safer stand-off distances are all combat missions now being emphasized by the Navy as it prepares its Littoral Combat Ship for massive “blue water” warfare - an effort designed to widen the ship’s attack potential and build upon its expansive scope of shallow water missions.

As part of this, the Navy has fired a HELLFIRE missile from an Independence variant of its LCS to better arm the ship for offensive attack. The test-firing, described by Naval Sea Systems Command as a “structural test firing,” involved the shooting of a Longbow HELLFIRE on the Point Mugu Sea Range on June 11.

Referred to as the Surface-to-Surface Missile Module, the weapon is being prepared as part of an integrated suite of combat technologies for the LCS. For many years now, the Navy has been working vigorously to evolve the LCS mission scope from an initial focus upon littoral operations including land attack, countermine operations and closer in combat operations -- to include preparation for dispersed, long-range, major deep water warfare against a heavily armed near-peer adversary.

While utilizing speed and shallow draft to access areas less available to larger, deeper draft ships, the LCS is still very much intended to perform closer-in missions. However, giving the ever-evolving “great-power” competition and focus upon near-peer threats, the service has for several years been immersed in a large-scale effort to better arm its surface fleet - especially the LCS - with combat equipment necessary for large-scale war. This adaptation, involves not only adding weapons and sensors but also adjusting and utilizing its existing war assets such as counter-submarine warfare, surface attack and countermine missions.

While not quite the scope of the now-in-development over-the-horizon missile currently being fast-tracked for the emerging Frigate and the LCS – a HELLFIRE offers a much wider offensive attack range to include enemy aircraft, helicopters, drones, small boats and even some surface ships.

Furthermore, the HELLFIRE, drawing upon Army-Navy collaboration, is engineered with different variants to widen potential attack methods. These range from blast-frag warheads to high-explosive rounds or even missiles with an augmented metal sleeve for extra fragmentation.

While the LCS does not have Vertical Launch Systems, Navy officials tell Warrior Maven that the HELLFIRE can fire from canisters beneath the surface of the ship.

​It is accurate to call it a short-to-medium-range weapon which can reach relevant combat distances beyond the most close-in threats - while stopping short of being an over-the-horizon weapon.

Its targeting options open up various airborne interoperability options, meaning an MH-60R ship-based helicopter – or even a drone – could function as a laser designator for the weapon should it seek to target enemy ships on-the-move.

The Navy has made particular efforts, in fact, to integrate HELLFIRE technology, sensors and fire control with other assets woven into the LCS. Not only could an MH-60R offer a laser spot for the ship launched weapon, but the helicopter can of course fire the HELLFIRE itself.

A ship launched variant, however, would need to further integrate with ship-based layered defense technologies to optimize its attack options against enemy aircraft and ships, particularly in a maritime combat environment potentially more difficult for helicopters to operate in. This would include engineering the ship to operate as part of a broader ship-wide technical system connecting things like variable-depth sonar, deck guns, vertical take-off drones such as the Fire Scout and small boat mission capabilities such as 11-meter Rigid Inflatable Boats, or RIBs. The Surface Warfare Mission Package also includes the Gun Mission Module, containing 30mm guns, Navy statements say. As part of this, the LCS is equipped with a 57mm gun, .50-cal Machine Guns and a defensive interceptor missile called SeaRAM.

The exercise is also designed to prepare the ship and train the crews for more complex surface warfare tracking and live-fire exercises scheduled to begin later this summer, which will culminate in initial operational test and evaluation at the end of 2019, the service reported.

Arming the LCS to a much greater extent is also likely to bear upon the longstanding discussion regarding the ship's survivability. While many advocates for the LCS champion its 40-knot speed and technical attributes such as its integrated mission packages, adding more substantial weapons clearly impacts the debate by massively increasing the ship's survivability and combat capability.

Some of the features and technologies now being developed for the Navy’s new Frigate are being back-fitted onto the existing LCS fleet as well; these include an over-the-horizon offensive missile as well as, possibly, a survivability-enhancing technique called “space armor,” which better allows the ship to function if it is hit by enemy firepower.

This recent structural test firing is intended to build upon and advance Previous HELLFIRE LCS testing and development, which as of last year had resulted in 20 successful hits out of 24 total attempted missile shots, Capt. Ted Zobel, Program Manager, PEO LCS, said in 2018 at last year’s Surface Navy Association symposium