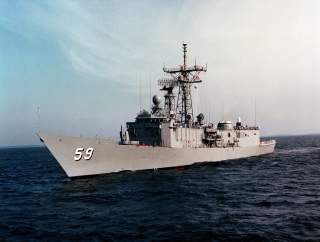 The Navy originally conceived of the FFG(X) frigate as a small, inexpensive warship with modest combat capabilities that would complement the fleet's bigger, pricier and more sophisticated destroyers and cruisers.

But in the five years since the sailing branch decided it needed a new frigate, the FFG(X) has grown in sophistication. The warship the Navy projects it will start building in 2020 could feature many of the same weapons and sensors as bigger ships. And it could have extra space and power for future upgrades.

Incredibly, the frigate might have gotten cheaper while also becoming more capable, owing to the Navy's decision to use an existing combat system on the vessel instead of developing a boutique system specifically for the class.

The frigate program emerged from the Navy's February 2014 restructuring of the troubled Littoral Combat Ship program. Instead of buying 52 LCSs with their fragile hulls, sparse weaponry and unreliable systems, the Navy reduced LCS procurement to 35 vessels and launched the "FF" frigate study. The study led to the formal FFG(X) program.

The Navy plans to base its FFG(X) design on an existing warship type and buy them at a rate of one or two per year starting in 2020. Five shipbuilders have proposed designs.

The sea service expects to spend $1.2 billion on the first FFG(X) and no more than $950 million apiece for the next 19 vessels in the class. By comparison, an LCS in 2018 cost around $650 million minus its plug-and-play weapons.

An FFG(X) could be around 400 feet long and displace around 5,000 tons, depending on the design the Navy selects, making it roughly half as big, in terms of displacement, as an Arleigh Burke-class destroyer.

"In contrast to cruisers and destroyers, which are designed to operate in higher-threat areas, frigates are generally intended to operate more in lower-threat areas, the U.S. Navy frigates perform many of the same peacetime and wartime missions as U.S. Navy cruisers and destroyers," the Congressional Research Service explained in a February 2019 report that the U.S. Naval Institute obtained.

"[B]ut since frigates are intended to do so in lower-threat areas, they are equipped with fewer weapons, less-capable radars and other systems and less engineering redundancy and survivability than cruisers and destroyers," the CRS continued.

The FFG(X) could be the exception to that rule as the Navy plans to equip the class with a wide array of weapons and sensors. "The FFG(X) design will likely be larger in terms of displacement, more heavily armed and more expensive to procure than either the LCS or the FF concept that emerged from the February 2014 LCS program restructuring."

According to a Navy document the CRS obtained, the FFG(X) will come armed with a 57-millimeter gun, a 32-cell vertical missile-launcher for SM-2 Block IIIC and Evolved Sea Sparrow missiles, a 21-round point-defense Rolling Airframe Missile launcher and eight launchers for over-the-horizon anti-ship missiles.

Its radar and combat system will be a smaller version of the Aegis system that equips the Navy's destroyers and cruisers. The frigate will embark an MH-60R helicopter and an MQ-8C drone. That weapons and sensor suite should give the FFG(X) the ability to engage enemy aircraft, ships and submarines at a distance of 100 miles or more.

The SM-2 Block IIIC can do much more than just shoot down aircraft. With small tweaks to the seeker, the Navy has already given the SM-6 and SM-2 Block IIIC missiles anti-ship capability. Additional tweaks could allow the SM-6 -- and by extension the SM-2 Block IIIC -- to hit targets on land, according to missile-expert Thomas Karako at the Washington, D.C.-based Center for Strategic and International Studies.

The new frigate the Navy currently plans to acquire already is more sophisticated than is the ship the sailing branch first conceived of in 2014. If the Navy indeed does modify the SM-2 Block IIIC for the land-attack role and also adds a laser and an anti-submarine missile, the frigate could gain even more capability.

And it could do so without spending more money. The Navy wants the FFG(X) to cost no more than $950 million per ship after start-up costs. But the decision to fit the frigate with the existing Aegis system, rather than a custom-made combat system, reportedly shaved tens of millions off the price.

According to the CRS, it's possible the frigates will end up costing only around $800 million apiece, making them cheaper and more powerful than was the case just a few years ago.