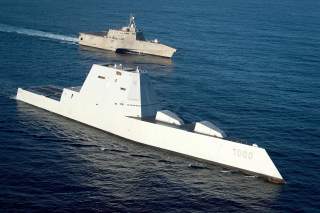 As the Navy commissions its second Zumwalt-class stealthy new destroyer, the service is expanding the strategic scope for the attack vessels and engineering the ships for new weapons, improved sensors and advanced applications of Artificial Intelligence and cloud technologies.

Beneath the highly visible shadow of its first-in-class stealthy USS Zumwalt destroyer, the Navy has been quietly making rapid progress with its second Zumwalt-class destroyer – the now commissioned USS Michael Monsoor. The Monsoor was commissioned last month.

Much like the lead Zumwalt-class ship, the 2nd is envisioned as a stealthy, multi-mission land and blue-water attack platform armed with long-range precision fires, a wide range of offensive and defensive missiles, faster computer processing speed and an electric drive Integrated Propulsion System with 78-megawatts of on-board electrical power.

“DDG 1001 employs an Integrated Power System (IPS), distributing 1000 volts of direct current across the ship. The IPS' architectural capabilities include the ability to allocate all 78 megawatts of installed power to propulsion, ship's service, and combat system loads from the same gas turbine prime movers based on operational requirements,” a statement from Naval Sea Systems Command said.

The ship, called DDG 1001, has now been commissioned following extensive tests, trials and demonstrations of the ship's HM&E systems (Hull, Mechanical & Electrical) including the boat handling, anchor and mooring systems as well as major demonstrations of the damage control, ballasting, navigation and communications systems, a statement from Naval Sea Systems Command said.

The HM&E delivery follows Navy reports of successful acceptance trials for DDG 1001 during which the ship tested power propulsion systems and high-speed turns while also assessing the HM&E engineering systems, according to a statement from General Dynamics Bath Iron Works.

The ship computer, called Total Ship Computing Environment, integrates many of the ship’s systems such as its radar, weapons and propulsion apparatus. Software upgrades impacting radar, fire control and some weapons areas represent some potential margins of difference making the ships more advanced. Raytheon is the primary ship integrator of the on-board computers and other Zumwalt-class technologies.

AI or cloud integration, should that happen in the near future, brings several new dimensions to maritime attack. One initial advantage, simply, is that increased virtualization enabled by cloud migration can greatly reduce the hardware footprint. Fewer “boxes” or servers will be required on board as a greater elements of the technical infrastructure become multi-function. Fewer numbers of sensors and data storage technologies allow for better integration and free up what’s called “size, weight and power” opportunities on board the ship.

Data access is another defining element of cloud migration, meaning sensors, weapons systems and things like navigational data can be accessed in a faster, more consolidated fashion. When greater automation or AI are added to the equation, sensor, targeting and weapons information can even be organized autonomously for human decision makers to consider.

AI integration could automate sensor and weapon integration - by comparing new information against vast volumes of data to analyze and organize combat-relevant data; this will give commanders a much improved sensor-to-shooter time with which to destroy fast-approaching targets.

Meanwhile, the third-in-class Zumwalt, the future USS Lyndon B. Johnson, has also been under construction and is nearing completion. The 3rd Zumwalt’s deck house, which unlike the first two ships built with composites, is made out of steel.

The three-ship Zumwalt fleet is likely to be in great demand in coming years as new threats emerge which present a need for its unique technologies. Given its stealthy configuration, it seems plausible that a Zumwalt class ship could lead an assault or help launch a broader attack by virtue of an ability to strike while avoiding detection.

Secretary of the Navy Richard V. Spencer recently mentioned the larger role of the Zumwalt-class, saying "This ship will provide independent forward presence and deterrence for decades to come,” according to a written statement from Naval Sea Systems Command.

If radar, aerial ISR or on-board MH-60Rs and Fire Scout drone assets detect long range threats or areas of incoming enemy fire, the Zumwalt could very well be called upon as a launching point for a counterattack.

Navy officials explain that, compared to previous destroyers, the Zumwalt-class fields a larger flight deck and has capacity for two MH-60R and multiple drones.

With its long-range precision gunfire technology, a Zumwalt could perhaps be successful in attacking more fortified enemy land targets without itself being as susceptible to land-based sensors and anti-ship missiles.

Furthermore, given its low radar signature, it might not seem like too much of a mission stretch to envision a Zumwalt-class destroyer as an element of an amphibious assault. Advanced on-board sensors could connect with drones and other ISR assets to help orient an approaching Amphibious Ready Group as to the best methods or locations of attack.

The 610 foot, wave-piercing tumblehome ship design provides a wide array of advancements. The shape of the superstructure and the arrangement of its antennas significantly reduce radar cross-section, making the ship less visible to enemy radars, a Navy statement writes.