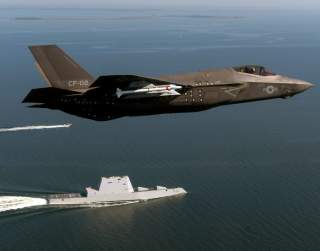 The U.S. Navy has formed an experimental unit that combines robot and manned ships.

Surface Development Squadron One (SURFDEVRON One) will develop tactics for combined operations between manned and unmanned ships, as well as testing new weapons.

Interesting is the choice of warship that the Navy to work with the robots. The new unit is based on the Navy’s squadron of Zumwalt-class destroyers (ZRON One). The Zumwalts have been problems for the Navy. These sleek, futuristic-looking stealth ships were designed in the early 2000s to be shore bombardment platforms armed with cannon hurling long-range shells. But the ships, which cost nearly $5 billion apiece, were plagued by troubles, delays and cost overruns, including issues with their weapons. The result was that the planned buy of thirty-two Zumwalts was slashed to just three.

“SURFDEVRON will focus its early efforts on experimenting with the rather unique Zumwalt DDGs—which were converted to blue water strike assets after a long-range land-attack munition for its new gun became too costly and was abandoned—and learning how to leverage the ship’s all-electric Integrated Power System and other features,” according to USNI News. The squadron will also work with a variety of robot craft that the Navy is developing, including the Medium and Large Unmanned Surface Vessels.

Another part of the squadron will be Sea Hunter, a particularly suitable robotic consort for the Zumwalts. A yacht-sized unmanned ship capable of sailing autonomously for thousands of miles, Sea Hunter is designed to detect and shadow quiet diesel submarines for days at a time, until armed anti-submarine forces arrive to sink the target. In effect, Sea Hunter is a step toward a kind of robot Zumwalt, and a nod toward a future where autonomous ships take over dreary tasks such as tracking submarines.

In addition to manned-unmanned teaming, the Navy sees SURFDEVRON One as a way to accelerate testing of new technologies such as laser and hypersonic weapons. “Really the whole purpose of the SURFDEVRON is to integrate technical, tactical and material solutions at an accelerated rate,” Brown said. “And as new capabilities are coming online, whether it’s directed energy weapons or high-energy lasers or hypersonic missiles, we need to rapidly be able to experiment and get these new systems out on ships or platforms, develop the new TTPs (tactics, techniques and procedures) and experiment and move at a faster pace than we have probably moved in the past.”