The U.S. Navy's Worst Fear: How China Could 'Kill' an Aircraft Carrier 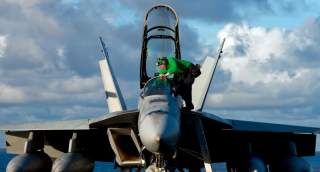