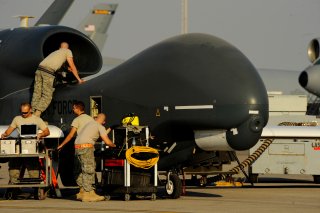 The Chinese threat in the Pacific region may prompt America’s allies to acquire additional high-altitude, long-endurance unmanned aircraft the surveil the expansive ocean areas from the sky.

Japan has already purchased three RQ-4 Global Hawks and could buy more. South Korea has acquired four Global Hawks. Both Japan and South Korea have the ground station command and control equipment required to launch the unmanned aircraft, which can increasingly “network” with one another.

The Air Force’s Advanced Battle Management System, a fast-evolving contributor to the Defense Department’s Joint All Domain Command and Control program, which connects the military services, has had success securely networking different data nodes across the services. These advances could bridge seemingly impassable transmission gaps beyond the horizon or created by mountainous terrain, which would allow the Global Hawk unmanned aircraft to improve its data-sharing process. This could prove vital for countries like Japan, which need to cover ocean areas around its coasts that are vulnerable to Chinese intrusion. Last year, Japan was given the green light by the United States to purchase 105 of the F-35 stealth fighter jets. These jets would be able to communicate with the Global Hawks on a new level. They could relay threat data, pass off targeting specifics, share surveillance video in real-time and process data at the point of collection.

Advances in processing speed and sensing tied to software and computer processing upgrades could allow the Global Hawk to share information with weapons systems in locations separated by line-of-sight connectivity. For instance, a Global Hawk could alert the fighter jets to the movements of an adversary’s military assets on the other side of a mountainous island chain. This could prove decisive in any warfare engagement given that the ability to process information at the point of collection could greatly truncate sensor to shooter times. Global Hawk aircraft may not be anywhere near as vulnerable as they were thought to be years ago. Perhaps the retirement of older Global Hawk aircraft, known as Block 30, is unwise in light of new threats and global operational requirements. These unmanned warplanes may be more relevant today than they were during Operation Iraqi Freedom.