U.S. Pullout of Afghanistan Could Embolden Extremists in the UK 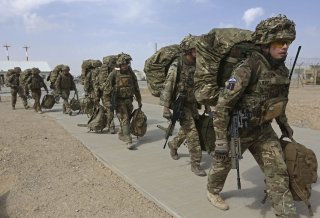 The “special relationship” between the United States and the United Kingdom has certainly had its ups and downs over the past eight decades, but if it were to declare its status on social media now it might have to go with “It’s complicated.” President Joe Biden’s pull out of Afghanistan has infuriated British politicians and soldiers, who remember that it was twenty years ago that then British prime minister Tony Blair had declared that the UK would stand “shoulder to shoulder” with the United States.

Over the next two decades, the UK was unflinching in its support for the U.S.-led coalition effort in Afghanistan. Now that the troop withdrawal is complete, Afghanistan is back in the hands of the Taliban and many signs point to the Central Asian country once again becoming a safe haven for insurgent groups and even terrorists. What is even more alarming is that Afghanistan could be a base of operations to stage attacks abroad, including in the UK.

In his inaugural address on January 20, Biden pledged, “We will repair our alliances and engage with the world once again.”

Just weeks later, in another speech on February 4, Biden proclaimed that “America is back. Diplomacy is back at the center of our foreign policy.”

Both statements ring hollow, given the handling of the pull-out of Afghanistan, not to mention the fact that Biden took two full days to contact British prime minister Boris Johnson after the Taliban had seized Kabul.

Biden then further upset London by refusing Johnson’s request to extend the deadline for the evacuation of foreign nationals. The president made it clear the date was carved in stone and was unwavering.

It isn’t just UK politicians who have reason to be upset. Ken McCallum, director-general of MI-5, the UK’s domestic counter-intelligence and security agency, has warned that the fall of Afghanistan could have emboldened UK terrorists.

McCallum told the BBC on Friday that a total of thirty-one late-stage terror plots had been foiled in the UK in just the past four years. Now that the Taliban is running the show again, it is likely efforts by insurgents and terrorist groups could refocus their efforts, while they may have received a "morale boost" by driving out the greatest power in the world.

“The terrorist threat to the UK, I am sorry to say, is a real and enduring thing,” McCullum told the BBC. “Of course there are likely to be terrorist attacks on UK soil on my watch.”

He further went on to say that MI5 will work as hard as it can to stop them from happening but "to our horror, we know that won’t be possible on every single occasion.”

The sentiment is similar to President George W. Bush noted after 9/11, that the counter-terrorist units need to get it right every time—while the terrorists only have to be lucky once for a real disaster to occur. In this case, the terrorists not only secured a great victory but don’t have to go on the run.

“There is no doubt that events in Afghanistan will have heartened and emboldened some of those extremists and so being vigilant to precisely those kinds of risks is what my organization is focused on along with a range of other threats,” added McCullum.