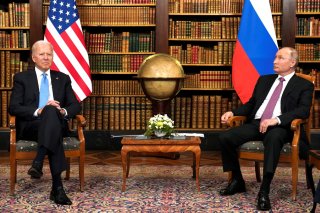 As talks over the future of arms control and strategic stability continue in Geneva between U.S. and Russian negotiators, much remains to be seen as to what the parameters of any follow-on agreement between the two countries will be.

But one thing is clear: despite the lack of any formally signed agreement, reengagement in negotiations and diplomacy is a positive sign for the U.S.-Russia relationship, one that is sure to strengthen the guardrails of an increasingly weakened arms control framework.

“The result of the latest plenary session between the U.S. and Russia last week in Geneva is, at the very least, laying the groundwork for better understanding and awareness between the two sides on threat perceptions and resulting priorities,” said Sahil Shah, a policy fellow at the European Leadership Network and advisor to the Office of the Executive Secretary at the Comprehensive Nuclear-Test-Ban Treaty Organization (CTBTO). “That is a win in and of itself because we’ve not had serious talks like this in basically a decade.”

Historically, an essential component of productive arms control negotiation is a mutually agreed upon sequencing for negotiations, a factor that heightens trust between the two sides and serves as a framework for mutual understanding. “The key for there being positive results has always been the formation of a sustained process, with diverse representation on both the political and military levels on both sides,” Shah told Michelle Dover, host of the Press the Button podcast.

A secondary priority for these negotiations, according to Shah, is developing a clearly defined role for the European community to play. On this front, current approaches could be expanded to more directly include European officials.

“There is a growing sense from Europeans that they are only being informed of progress, rather than being consulted or being provided space to provide meaningful input.” In Shah’s analysis, this must be addressed if the arms control community wants to maximize its chances of securing an agreement: “There needs to be a different mindset from the U.S. when it comes to the European role in the bilateral talks with Russia. We need transatlantic exploration of these issues especially as there is an appetite [in Europe] for dialogue with Russia.”

For many Europeans, participation is not solely a means of mediating between the two great powers they sit between, but part-and-parcel of securing their own security interests as well.

Any discussions between the United States and Russia will have implications for NATO-Russian relations and related negotiations, a reality that extends well beyond nuclear negotiations.

“It is important to note that there are diverse perspectives on what constitutes strategic stability in a West-Russia context,” Shah noted, adding that “the role of nuclear weapons as a factor in those perspectives varies greatly.”

Whether or not current talks in Geneva materialize an agreement between the United States and Russia any time soon—one thing is clear: any future diplomatic agreements on arms control need to be established through a participatory process that includes all relevant parties. Doing so will build a baseline of trust, cooperation, and collaboration that will strengthen the framework upon which future negotiations and agreements—nuclear and beyond—will emerge.

The entire interview with Sahil Shah is available here on Press the Button.