The U.S. Special Forces 'New' M110K1 Sniper Rifle: The Best on the Planet? 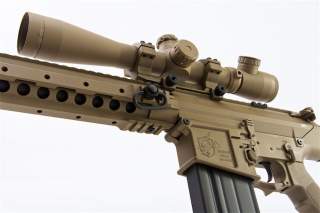 KAC’s M110 Semi-Automatic Sniper System (SASS) is one of the success stories in small arms procurement for the U.S. military in the twenty-first century. Designed to be a standard semi-automatic precision rifle to be used by various branches and special operation forces, the M110 has largely been successful in that role. The M110 is used by almost every branch of the military and has been adopted by many other militaries from the Americas to Asia. But while Big Army is replacing the M110 with the H&K CSASS, U.S. Special Operations Command (SOCOM) is planning to upgrade its M110s with the M110K1 upper conversion kit. But what does it do?

Long-range shooting has advanced significantly since the M110 was adopted in the 2000s. The 6.5 Creedmoor caliber has come to dominate the medium-caliber long range shooting scene, due to being able to accommodate bullets with far superior ballistic coefficients, resulting in flatter-shooting faster rounds. 6.5 Creedmoor is also generally held to have less recoil despite increased velocity.

The M110K1 changes this. While the M110 and CSASS were both optioned as conversions to 6.5 Creedmoor when the caliber was adopted, the M110K1 upper receiver was probably adopted as simply replacing the upper receivers is cheaper than developing a version of the CSASS in the 6.5 Creedmoor.

From photos released in 2019, the M110K1 also updated the M110’s design in other ways. The quad rail handguard of the original M110 is gone in favor of an M-LOK handguard, though the M110K1 M-LOK handguard has an integral Picatinny rail at the bipod attachment point. This is probably to avoid the torque issues that come with attaching bipods to M-LOK directly.

The adoption of the M110K1 is an important win for KAC, which lost the CSASS contract to H&K back in 2016. While KAC has seen continued contracts for procurement of the M110 in 2018, these contracts for the original M110 are likely to dry up as the CSASS begins to see service in the US Army and US Marine Corps.

So will big Army and Marine Corps switch over their CSASSs to 6.5 Creedmoor? It’s unlikely. The US Army is still fully invested in the Next Generation Squad Weapon program and is unlikely to spend money slightly improving the capabilities of a rifle they just adopted. The M110K1 is likely to remain a SOCOM-only rifle.

However, the Dutch military may also be looking into a similar rifle to equip its forces. In January 2020, the Dutch minority announced a contract for twenty-four designated marksman rifles in .260 Remington. The small initial contract order for rifles suggests that they will be used by Dutch Special Operation Forces rather than the regular military.