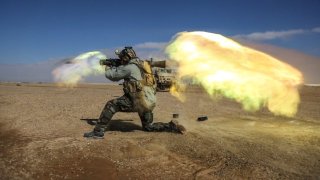 The strategy is clear: the Pentagon seeks to reinforce and build upon the unexpected success of Ukraine’s anti-armor fight against the Russian invaders. Using special hit-and-run tactics, ambushes, and dispersed groups of surprise attackers at key intersections and crosspoints, Ukrainians firing anti-armor weapons have demonstrated the ability to slow down, thwart, and even destroy Russian mechanized armored advances.

Senior Pentagon officials have made it clear that the weapons support packages are specifically designed to enhance this successful Ukrainian anti-armor effort. The most recent package includes 1,000 more Javelins, anti-tank TOW missiles, and thousands of additional anti-armor rounds.

“We're providing 2,000 anti-armor rounds. Now, these are just the rounds because the Ukrainians have a number of existing anti-armor and anti-personnel weapons systems. Many of them were provided by allies and partners. One example is the Carl Gustaf system. So we're providing these rounds to complement those existing systems,” a senior defense official told reporters.

The Carl Gustaf was used by U.S. Army soldiers in Afghanistan, and it has also been used by U.S. Army Rangers, Navy SEALs, and other special forces since the late 1980s, Army weapons developers have explained.

The Carl Gustaf, which is manufactured by Saab, includes an airburst capability with its High Explosive, or HE, round, The HE airburst round uses a mechanical time fuse set before the weapon is loaded. Airburst rounds can be pre-programmed to explode in the air at a precise location, thereby maximizing the weapon's effect against enemy targets hiding, for example, behind a rock, tree, or building.

Several Carl Gustafs were initially sent to Afghanistan years ago as part of a limited operational assessment. The Army purchased the weapon by joining with U.S. Special Operations Command in a combined purchase from Saab.

The Carl Gustaf is also able to fire anti-tank, flechette, illumination, enhanced armor, smoke and High Explosive Dual Purpose rounds, Army weapons developers explain. The HE round can be set to detonate upon impact or explode on “delay” after penetrating the target.