U.S. Submarines Could be Armed With More Anti-Ship Cruise Missiles to Counter China 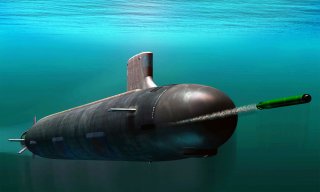 As China's People's Liberation Army Navy (PLAN) is now the largest naval force in the world, and has continued to increase its anti-ship capabilities including recent tests of its aircraft carrier-killer missiles, the United States Navy is seeing the threat and is responding accordingly. This could include arming the Submarine Forces with more anti-ship cruise missiles.

According to a report from Defense News, earlier this month Vice Adm. Daryl Caudle explained how arming submarines with longer-range weapons including the upcoming Maritime Strike Tomahawk could help the U.S. Navy maintain an edge – even if its overall fleet size is smaller.

Long-range torpedoes could be part of the answer, but long-range missiles such as the Harpoon and the Maritime Strike Tomahawk, which has a range of about 1,000 miles, could provide the necessary stand-off capability the U.S. Navy requires. The anti-ship version, which incorporates a new seeker, is one of the three Block V variants of the Navy's cruise missile now in development. It is slated to be online by 2023, DefenseNews reported.

The Tomahawk has remained a workhorse missile for the U.S. military for decades. It was developed to counter Soviet air defenses and flies at a low-altitude trajectory, which is often parallel to the surface of the ocean to elude enemy radar. The missile is precise and has been proven effective against fixed targets and in past engagements was used to destroy enemy command control centers, bunkers and other high-value infrastructure.

The Maritime Strike Tomahawk has been newly-configured to destroy moving targets at sea. It utilizes improved radio throughput along with new networking, sensing and targeting applications that allow it to adjust and re-route in flight while it closes in on its moving targets.

Submarines have long been seen as a way to give the U.S. Navy an advantage in a potential conflict with China, but at issue is the fact that the Submarine Forces' fleet is declining as the aging Los Angeles-class attack submarines are being decommissioned. The U.S. Navy could see its submarine force fall from around fifty boats to just forty two by the end of the decade.

While the Navy has considered options that could extend the service life of the older attack submarines, the service is also facing a nuclear-armed ballistic missile submarine shortage. The new Columbia-class submarines are under construction, but won't be fully delivered until 2042 at the earliest with the arrival pace of one per year from 2033 through 2042. However, given the retirement of the existing Ohio-class boats, which have already been greatly exceeded their service life, the overall fleet size is also expected to drop in the coming years.

Given these twin threats, the ability to increase the strike potential with improved anti-ship missiles is something that the Navy can't move forward with fast enough.