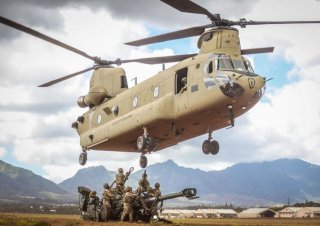 A major think tank is sounding the alarm over what it describes as the U.S. military’s waning capabilities.

The 2022 edition of the Heritage Foundation’s 600-page index of U.S. military strength concluded that the country’s armed services are only marginally able to meet the demands of defending America’s vital national interests.” Each branch was issued one of five military power rankings—“very weak,” “weak,” “marginal,” “strong,” or “very strong,”—across three areas, “capacity,” “capability,” and “readiness,” as well as an overall grade.

The Army—rated as “marginal”—embarked on sweeping modernization programs, but most of these projects are still in their early development stages. The Heritage Foundation notes that the Army is “aging faster than it is modernizing,” pointing to difficult long-term growth prospects.

The Navy still sits at “marginal,” but is trending towards “weak.” Capacity remains the underlying problem, with the Heritage Foundation positing that the service’s battle force of 296 ships is “much too small relative to its tasks.” The report adds that the Navy must aim for a target of at least 400 ships, but “current and forecasted levels of funding will prevent this from occurring for the foreseeable future.” The Navy, like the Army, is aging faster than it is modernizing, hurting the service’s capabilities relative to its great-power competitors.

The U.S. Air Force (USAF) has been downgraded from “marginal” to “weak.” A pilot shortage and a downward trend in flight time have dealt a significant blow to the service’s readiness for a major conflict. USAF’s modernization programs, while “healthy,” are struggling to keep pace with the service’s aging inventory.

The Space Force, established in December 2019 at the initiative of former President Donald Trump, was rated as “weak.” The service, according to the Heritage Foundation, does “not have enough assets to track and manage the explosive growth in commercial and competitor-country systems being placed into orbit.” The Space Force is likewise being held back by increasingly outdated platforms that are aging faster than they can be replaced.

The U.S. nuclear capability remains “strong,” but is trending towards “marginal” or even “weak.” Heritage notes that, while the Trump White House made strides in reversing the decline of the U.S. nuclear arsenal, the integrity of these efforts remains uncertain under the present administration. “Failure of on-time appropriations and lack of Administration support for nuclear modernization could lead to a rapid decline in this portfolio to “weak” in future editions,” the report adds.

There was one instance of good news, however. The Marine Corps was upgraded from “marginal” to “strong,” with the Heritage Foundation lauding the service’s “extraordinary efforts to modernize (which improves capability) and enhance its readiness during the assessed year.” The Marines’ rating bump partly stems from Heritage’s acknowledgment that the service is a “one-war force” and thus has a relatively modest capacity threshold.