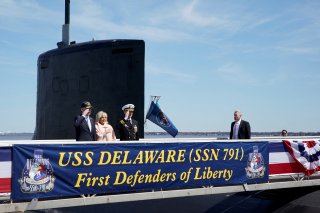 A Navy press release said that because of COVID-19, “there was no traditional commissioning ceremony held when USS Delaware was commissioned administratively on April 4, 2020. On that day, the submarine was underway and became the first U.S. Navy ship commissioned while submerged.”

“USS Delaware stands before you as the ideal ship,” Cdr. Matthew Horton said in the U.S. Navy statement.

The Virginia-class submarines are among the most capable and deadly in the world. One of them, the USS South Dakota, has a new, secretive propulsion system. The propulsor, developed with assistance from the Defense Advanced Research Projects Agency, is thought to be lighter than a traditional screw propeller and is likely quieter.

The Virginias are “limitless in range; unmatched in power, precision, and stealth. Her engineering renders her nearly undetectable; her sensors reveal the presence of any foes,” the press release said. “Capable of dominating across the spectrum of warfare, she excels in all her assigned missions. From the depths of the ocean, ensuring sea control, to delivering precision strikes and supporting naval special warfare.”

Fast-attack submarines can also “project power ashore with special operations forces and Tomahawk cruise missiles in the prevention or preparation of regional crises.

Block III of the Virginia class includes significant differences from its predecessors. Rather than twelve vertical launch missile tubes that house Tomahawk Land Attack Missiles, the Block III sports a pair of large-diameter tubes that can carry a larger payload.

The class also features photonic masts that allow the ship to dispense with traditional periscopes, allowing the command-and-control room to be located deeper within the submarine.