USS Gerald R. Ford Could be Getting Crowded as Carrier Qualifications Commence 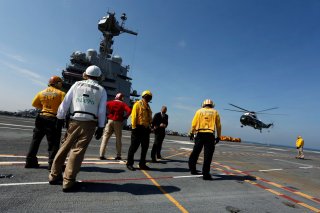 The USS Gerald R. Ford (CVN 78), which remains the only carrier qualification (CQ) asset that is regularly available for duty on the East Coast this year, commenced its second round of CQs for Fleet Replacement Squadron (FRS) pilots earlier this month.

Ford has been operating at-sea at the same time as four other U.S. aircraft carriers and has conducted its fourth independent steaming event (ISE) since commencing an 18-month Post Delivery Test and Trials (PDT&T) phase of operations last November.

The carrier has completed readiness projects to board 1,000 personnel for an upcoming assignment, which will include integrating the warship with personnel and aircraft of Carrier Air Wing 8 (CVW-8) and Carrier Strike Group 12 (CSG-12). That will mean that more fixed-wing and rotary aircraft will be aboard the ship than usual.

“Our crew is tough and has adapted quickly to the acute changes we’ve made to our operating procedures and day-to-day life onboard,” said Commanding Officer Capt. J.J Cummings. “Their resiliency, their grit allows us to get underway and accomplish the mission,” added Cummings. “Getting underway knowing that our crew will be generating readiness for the fleet, along with the four other carriers at sea, is extremely rewarding. We are also proud that several of these aviators who carrier qualify on our ship will be heading over the horizon soon to join deployed carriers throughout the world.”

While underway Ford will also conduct FRS CQ with pilots from Airborne Command and Control Squadron (VAW) 117 and VAW-120, as well as Strike Fighter Squadron (VFA) 106.

VAW-17, known as the “Wallbangers,” has been completing a transition from the E2-C Advanced Hawkeye early warning aircraft to the upgraded E2-D Variant.

“The E-2D is our latest and greatest aircraft that has a lot of good equipment and a really good radar that’s going to allow us to see our enemies at distances that we really haven’t seen before,” Lt. Cmdr. Jeremiah Caldwell, a pilot assigned to VAW-117 told Navy Recognition. “The training process for us is about three years just to get to the fleet, so we are here aboard Ford training fleet aviators that are making the transition from the Charlie to the Delta.”

As part of its post-deliver window of opportunity for maintenance (WOO) 10, the aircraft carrier was improved to provide over 125 offices and berthing spaces for its officers, while its foods stores sections were also expanded. As a result the ship will now carry about 3,700 sailors. The upgrades to the Ford were achieved with support from Huntington Ingalls Industries (HII) Newport News Shipbuilding Division, Naval Sea Systems Command (AVSEA) and Technico.

The ship is named after the 38th President of the United States and since her commissioning in 2017 she is the largest aircraft carrier in service and the largest warship ever constructed in terms of displacement. Her sister ship, USS John F. Kennedy (CVN-79) is being fitted out, and is scheduled to replace the USS Nimitz (CVN-68), while USS Enterprise (CVN-80) is under construction with a planned commissioning for 2027 to replace USS Dwight D. Eisenhower (CVN-69).