The U.S.S. Gerald R. Ford is the Navy's First ‘Supercarrier’ 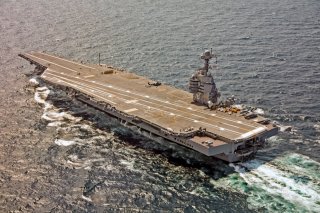 U.S. Chief of Naval Operations, Adm. Mike Gilday, visited Hampton Roads, Virginia, to mark the centennial of American naval aviation. In a statement, the U.S. Navy explained the area’s importance, saying that “the Hampton Roads area has the largest concentration of fleet headquarters, administrative, and communication facilities outside of Washington, D.C.”

“For 100 years aircraft carriers have been the most survivable and versatile airfields in the world,” Admiral Gilday said during the celebration. “Perhaps no single military platform distinguishes what our nation is … and what it stands for … more than the aircraft carrier.”

The Aircraft Carrier of the Future

The U.S. Navy’s newest aircraft carrier, the USS Gerald R. Ford, is nearly ready to set sail with the Navy. The enormous ship has gone through three sets of shock trials designed to test the ship’s resilience against damage accrued during battle by detonating explosives underwater near the ship’s hull.

The USS Gerald R. Ford is the first of ten “supercarriers” that the Navy plans to build. These aircraft carriers differ from their predecessors in significant ways. First and foremost, the supercarriers are enormous—they’re the largest ships in terms of displacement ever built for the U.S. Navy.

They will also operate using advanced nuclear reactors. They produce an estimated 25 percent more power than the previous generation of nuclear power plants in order to accommodate new technologies as those technologies mature and become available.

Many of those future technologies are electricity-intensive. Laser weapons, for example, could offer significant defensive—and perhaps even offensive—capabilities, but they require the large amounts of electricity only a nuclear-powered carrier could provide.

Another of the Ford-class carrier’s advantages over their predecessors is their electromagnetic launch system, which uses electricity rather than steam power to launch. As a result, the Electromagnetic Aircraft Launch System can launch more aircraft at a faster rate than ever before.

“The work being done here in Norfolk, in partnership with BAE Systems, is helping to ensure our Navy is ready and has cutting edge capabilities,” Admiral Gilday explained, emphasizing the importance of carriers for the Navy.

“Working together with industry partners, we will drive down maintenance delays that reduce our readiness, while we continue to make sure our Sailors have what they need to fight and win.”