USS Nimitz Prepares For One of its Last Deployments 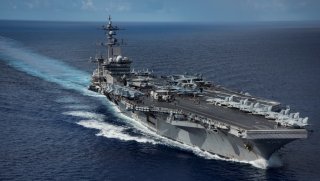 Earlier this week, residents near west Seattle were treated to the sight of the USS Nimitz heading out to sea as the nuclear-powered aircraft carrier prepares for a series of post-repair sea trials. The Nimitz, which is the lead ship in a class of ten U.S. Navy “supercarriers,” arrived at Puget Sound Naval Shipyard in November.

It was just last April that the vessel completed one of the longest warship deployments since World War II. As the crew endured COVID-19 quarantines during the year-long and 99,000 nautical mile deployment, it still successfully launched more than 10,000 sorties and logged more than 23,000 flight hours.

Workers at the shipyard and the carrier's crew have worked almost nonstop to ready the Bremerton-based Nimitz after an initial trek to sea ended early due to problems with a support system in its reactor propulsion plant.

"The repairs are complete and we're ready to go," Navy Capt. Craig C. Sicola, the warship's 20th commanding officer, said in an interview with the Kitsap Sun earlier this week.

About 40 percent of the crew is new to the 102,000-ton carrier, and the next few months will prove critical as they adjust to life aboard what is essentially a floating airbase. Approximately 3,200 sailors and some 2,480 airmen will call the warship home.

Captain Sicola, a veteran helicopter and jet fighter pilot, has already expressed confidence in his crew.

"It's going to all come together," Sicola said. "[The sailors] are excited to get out to sea. When they've been getting onto the flight deck, they say, 'This is why we joined.'"

Sicola also praised the Puget Sound Naval Shipyard for its work in getting Nimitz back on schedule.

"There's no one that could've gotten this ship ready like [the shipyard] did," Sicola added. "That's why it's the Navy's premier shipyard."

The Puget Sound Naval Shipyard workers and the carrier's crew reportedly put more than 330,000 collective man-days into restoring the warship, the oldest of the Navy's eleven active nuclear-powered carriers.

The ship’s next deployment is very likely to be one of her last. The forty-seven-year-old carrier is due to finally be inactivated in 2025. However, there has been some talk of extending its lifespan.

The U.S. Navy released a thirty-year shipbuilding plan in December that set the ambitious goal of building a 546-ship fleet by 2050. The plan calls for 404 new vessels to be constructed and 304 vessels to be retired. Notably, Nimitz and thirteen nuclear-powered submarines will be retired.

The carrier could be retired by the end of this year and start the recycling process by 2025. The process involves at least three phases: inactivation, reactor-compartment disposal, and recycling.

As the process will involve the defueling of the ship’s two nuclear reactors, it won't be quick. The ship’s fuel will be moved to a shielded transfer container before being shipped via a special container to the Naval Reactors Facility in Idaho. The reactors will be thoroughly cleaned, sealed, and removed, and then sent to a Department of Energy (DoE) facility in eastern Washington.

Following those steps, any remaining parts from the USS Nimitz that could be used on other carriers would be removed and prepared for use. Parts of the USS Enterprise, which is already in the recycling process, ­ have already found their way onto some Nimitz-class carriers. While they will no longer be actively used, the retired carriers will help other vessels continue to sail with the U.S. Navy.