USS Truman Carrier Strike Group to Remain in the Mediterranean 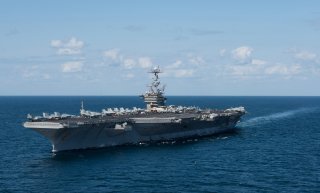 Secretary of Defense Lloyd Austin has decided to keep the USS Harry S. Truman aircraft carrier and its associated carrier strike group on duty for longer than originally anticipated, UNSI News reports. The decision comes in the context of Russia’s ongoing invasion of Ukraine and the consternation the move has caused the United States and its allies in Europe.

Secretary of Defense Austin “reviews the posture literally every day, and he has decided that he’s going to keep the 82nd [Airborne Division] there for a while longer,” Pentagon press secretary John Kirby explained to reporters on Thursday. “And he has decided that [USS] Harry S. Truman and her strike group will stay in the Med for a while longer.”

The USS Truman is usually stationed in Norfolk, Virginia, and left at the beginning of its last deployment according to plan. However, the Pentagon opted to modify the aircraft carrier’s plans, stationing the ship in the Mediterranean instead.

“What we’re trying to be careful of is sort of our hard ending dates on these temporary deployments because we want to be able to monitor the situation on the ground and make the best and most flexible decisions in real-time,” Kirby explained.

“We’ll take each one as it comes and the secretary will decide whether that capability needs to stay, yes or no,” Kirby said. “And then if it does, does it need to be that unit? Or do we need to rotate that unit out?”

The Navy’s sister service, the U.S. Marine Corps, has also shifted its focus to Europe, recently sending a small force of 200 Marines to Lithuania. This comes on the heels of a recent deployment of Navy and Marine Corps aviation personnel to Germany to bolster NATO’s presence in Eastern Europe.

Besides the significant human suffering that Russia’s offensive in Ukraine has caused, the aggression has also prompted a shift in European defense. The continent’s military spending has increased significantly. And although the United States would like to shift both attention and resources toward Asia, the European continent’s importance is unlikely to wane in the coming years.