With Vaccine Diplomacy to Taiwan, U.S. and Japan Steal March on China 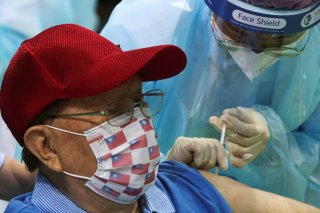 In a statement on June 3, 2021, President Joe Biden emphasized that the United States is sharing Covid-19 vaccines with other nations to “to save lives and to lead the world in bringing an end to the pandemic” instead of “[securing] favors or [extracting] concessions.” Biden’s comment is a snipe at China, which has been utilizing vaccine diplomacy to extend its influence. China, on the other hand, has accused the Biden administration of “suspicious intentions” when the White House announced its drive to donate 80 million vaccines globally. China has also accused Japan of seeking “selfish political gains” with its donation of 1.24 million vaccines to Taiwan. What are the issues at stake behind these less-than-friendly diplomatic exchanges? What are the logics behind vaccine diplomacy in Asia?

Taiwan enjoyed a spectacular early success containing Covid-19. When most countries were under lockdown in 2020, life went on as normal in Taiwan. As a result, the current Taiwanese administration under the Democratic Progressive Party (DPP) President Tsai Ing-Wen saw high approval ratings, to Beijing’s displeasure. President Tsai’s party—the DPP—historically advocates the pursuit of Taiwanese independence despite Beijing’s claim of sovereignty over the island. Furthermore, Taiwan’s success story with Covid-19 undermines Beijing’s narrative that China’s success in containing the virus—albeit only with draconian measures—demonstrates the superiority of the Chinese political system to liberal democracies in governance.

Taiwan suffered a change of fortune in May 2021 when the infectious British Covid-19 variant reached the island. Taiwan, as a prisoner of its past success, was taken by surprise. Few people in Taiwan were vaccinated and Taiwan had not thought it necessary to stockpile vaccines given the practical non-existence of Covid-19 in Taiwan. Currently, there are more than 10,000 Covid-19 cases in Taiwan. As the number of cases has grown, the Tsai administration’s approval rating has plummeted. This provides Beijing with an opportunity to further its political objectives. Soon after the Covid-19 outbreak in Taiwan, China’s Taiwan Affairs Office declared that China was open to donating Chinese vaccines to Taiwan.

Beijing’s “goodwill” confronts Taiwan with a dilemma. Taiwan’s acceptance of Chinese vaccines would delegitimize the Tsai administration’s strategy of working with the United States and Japan to resist growing Chinese power. If China comes to Taiwan’s aid before the United States and Japan, Beijing could propagandize that Japan and the United States are unreliable partners with neither the capabilities nor resolve to assist Taiwan in a timely fashion during a crisis. Beijing’s “goodwill,” therefore, could be interpreted as a strategy potentially designed to “reveal” how the United States and Japan’s “rock solid“ commitments to Taiwan and its other Asian allies are simply empty words. This would have two positive implications for China. First, it could reduce Taiwan’s resolve to fend off China; public opinion research has shown that the Taiwanese public is less likely to resist China when it questions U.S. support. Second, it could undermine the U.S. and Japan’s leadership in the Indo-Pacific. Taiwan is often seen as the canary in the coal mine for testing U.S. and Japanese determination to contain Chinese influence.

On the other hand, if Taiwan refuses to accept the Chinese vaccines, the DPP administration could suffer a further collapse in support, potentially paving the way for Taiwanese politicians more sympathetic to Chinese concerns to rise to power in the 2022 local elections and the 2024 presidential election.

Beijing executed its strategy with finesse. Pro-China politicians have pressured the Tsai administration to accept the Chinese vaccines, in addition to directly negotiating the import of Chinese vaccines through local governments in order to sidestep Taiwan’s central government. One of Taiwan’s top politicians came out to complain that the United States had failed to provide Taiwan with vaccines despite the fact that Taiwan had been buying both U.S. arms and U.S. pork (Taiwan has recently opened its market to U.S. pork with ractopamine despite domestic opposition). Additionally, it is rumored that China has been obstructing Taiwan’s attempt at securing the Pfizer/BioNTech vaccines. On top of all this, Beijing has been encouraging Taiwanese citizens—in particular celebrities and politicians—to fly to China to get vaccinated; China’s Taiwan Affairs Office claimed that 62,000 Taiwanese citizens have been vaccinated in China. These tactics are all designed to pressure Taiwan into accepting the Chinese vaccines.

Importantly, Beijing’s vaccine strategy towards Taiwan rests on the assumption that the United States and Japan are “paper tigers” in relative decline that lack the will to challenge China’s growing influences. Does this assumption hold?

Tokyo’s Dilemma: To Help or Not to Help

Japan and the United States observed these developments with alarm. On May 24, Kentaro Sonoura (adviser to former prime minister Shinzo Abe) met with Hsieh Chang-ting (Taiwan’s de facto ambassador to Japan) and Joseph Young (the interim U.S. ambassador to Japan). In the meeting, Sonoura suggested that Japan could send its stockpile of AstraZeneca (AZ) vaccines—which Japan did not plan to use at the time—to Taiwan. Young welcomed the idea, and Sonoura took the idea to Abe. Abe supported the idea and lobbied Deputy Prime Minister Taro Aso and Prime Minister Yoshihide Suga. On June 4, Japan delivered 1.24 million doses of AZ vaccines to Taiwan despite Chinese protests.

This was not an easy decision. Tokyo faced its own dilemma when deciding on whether to send vaccines to Taiwan. If Japan helped Taiwan, it could undermine its efforts to improve Sino-Japanese relations in the past few years. Furthermore, Beijing could retaliate. In addition to diplomatic protests, Beijing could restrict its export of rare earth minerals to Japan or escalate tensions in the East China Sea. Furthermore, vaccine donations to Taiwan could destabilize the Suga administration. Two of Suga’s key supporters, Liberal Democratic Party (LDP) Secretary-General Toshihiro Nikai and LDP coalition partner Komeito, are both considered more sympathetic to China.

If Japan does not help Taiwan, the Suga administration would also face serious problems. First, Tokyo was concerned that inaction would send the undesirable message that it was not prepared to honor its pledge to strengthen its commitment to Taiwan. After the Biden-Suga summit on April 16, Japan issued—for the first time since the 1969 Nixon-Sato summit—a joint statement with the United States emphasizing the importance of maintaining peace and security in the Taiwan Strait. Taiwan’s Covid-19 crisis provided the first test for Japan’s new commitment to support Taiwan with the United States. Not supplying Taiwan with vaccines, therefore, would jeopardize Japan’s credibility with the United States.

Second, Tokyo is concerned that inaction would drive the Indo-Pacific countries away from the U.S.-Japan-led Free and Open Indo-Pacific (FOIP) initiative, which competes with Beijing’s Belt and Road Initiative (BRI)—even though Tokyo officially claims that FOIP is not meant to compete with the BRI. Any Japanese failure to send vaccines to Taiwan could stoke up fear of abandonment among the Indo-Pacific countries, encouraging them to bandwagon with China. This is a particular concern as China has been targeting the Southeast Asian nations with its own vaccine donation drive. Bolstering the FOIP has been Tokyo’s top foreign policy priority since the Abe administration; Suga refers to FOIP on almost every occasion that he explains his foreign policy.

Third, there was a risk for Suga that Abe’s support for him might weaken if Japan did not come to the aid of Taiwan. Abe, who is pro-Taiwan, is currently the de facto leader of LDP’s largest faction Seiwa-Seisaku-Kenkyukai.

Ultimately, Japan decided to send the vaccines to Taiwan. Tokyo assessed that Beijing would not be able to react too harshly to Tokyo’s action because Beijing could be criticized as being anti-humanitarian and hypocritical for doing so. Furthermore, Tokyo assessed that Beijing also has a stake in not letting Sino-Japanese relations deteriorate as Sino-U.S. competition intensifies. Beijing’s reaction to the U.S.-Japan joint statement on April 16 that referred to Taiwan had been surprisingly restrained. Although Beijing criticized the statement, the criticism came from relatively “low level”—China’s Foreign Ministry spokesperson, instead of the foreign minister. Lastly, Suga was able to keep the vaccine donation drive to Taiwan a secret until it became a fait accompli. The United States. soon followed Japan with its own donation of 2.5 million doses to Taiwan on June 20.