Vaping Epidemic? Why More and More Young People Are Turning to Vapes Despite the Health Risks 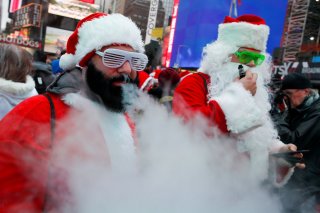 Vaping use is on the rise in young people, with as many as one in five junior and secondary school students reporting use of vaping products in 2019.

Vaping has been associated with severe respiratory health injuries and untimely deaths, and there is now the possibility that vaping may increase the risk of severe symptoms and complications in people infected with SARS-CoV-2, the virus that causes COVID-19. These emerging risks raise serious concerns that vaping’s real consequences — either to individuals or broader society — are not yet known.

As public health researchers at the University of Saskatchewan, we have been tracking the use of vaping products since 2014 using the Canadian Student Tobacco, Alcohol and Drugs Survey (CSTADS). As negative consequences emerge, more work must be done to prevent the growing use of vaping products.

Vaping use continues to increase among youth

The first collection of data about e-cigarette use among Canadian youth in 2014 showed that six per cent of students in grades 6 through 12 reported they had used e-cigarettes in the previous 30 days. By 2017, in the same national survey, that number had climbed to 10 per cent.

By 2019, e-cigarette use among youth had doubled compared to 2017. In the 2019 survey, 20 per cent of young people had used an e-cigarette in the previous 30 days, and 40 per cent of that group reported daily or nearly daily use of the products.

With the legalization of marijuana use in Canada in October 2018, there is a concern that we have yet to see how new behaviours like e-cigarette use, and their consequences, will become entrenched among youth.

E-cigarettes were initially invented with the goal of creating a more effective smoking cessation tool to assist individuals experiencing challenges quitting tobacco smoking. Despite this intention, 42 per cent of e-cigarette users indicated that they had never smoked a cigarette, not even a drag.

The device has the potential to normalize smoking behaviour among youth rather than provide an incentive for smokers to quit.

Expert opinion is divided as to the value of e-cigarettes as a smoking cessation tool. Despite offering a vehicle for nicotine replacement, e-cigarettes present their own health risks, and the devices may not encourage individuals to quit smoking because they do not break the link between their oral fixation and nicotine.

Another concern is that increased vaping could reverse the advances made over decades by anti-smoking campaigns by Canadian organizations.

A single e-cigarette pod can contain as much nicotine as an entire pack of cigarettes. Approximately 90 per cent of students who use e-cigarettes said they used products containing nicotine on the 2018-19 CSTADS.

In a study published in BMJ Tobacco Control that compared nicotine levels in young people who regularly smoked pod-style e-cigarettes (such as the very popular Juul) to those who regularly smoked conventional cigarettes, the e-cigarette smokers had higher nicotine levels. Additionally, e-cigarettes carry a greater risk of addiction, among youth, than smoking tobacco products, according to new research published in the International Journal of Environmental Research and Public Health.

Nicotine is a powerful drug when it is delivered efficiently. This new delivery device was designed to accomplish that, and is additionally enticing because it is seen as novel and trendy.

With the evolution of new types of cannabis concentrates (extracts such as shatter, crumble, budder and wax), greater risk of harm to youth has been created because these derivatives allow larger concentrations of compounds, like THC, to be inhaled very quickly.

Concentrate vaping is rapidly gaining in popularity and further expanding the room for experimentation with vaping among youth. Recent data suggest that youth are using highly potent cannabis concentrates in the form of oil, wax or liquid preparations, the health effects of which are yet to be well-researched, tested and standardized.

Furthermore, the impact of these highly concentrated products on brain development is unknown and may place youth at risk of cannabis use disorder and psychosis. These risks are further compounded by the emergence of vaping-related illnesses, such as e-cigarette or vaping use associated lung injury (EVALI), which to date has resulted in 68 deaths and over 2,807 cases in the United States.

In terms of substance use by youth, cannabis was second only to alcohol in 2019. In the same time period, cannabis vaping was reported by 42 per cent of youth, compared to 30 per cent the previous year.

With changing marijuana legislation, use and access to cannabis products by youth has increased, with four per cent of youth reporting that it has become easier for them to get cannabis for themselves. This increased access to such products may alter how cannabis is consumed by the over one million youth currently consuming cannabis.

Increased vaping and its unknown consequences threaten the health of our youth; it has been linked to higher risk of progression to cigarette smoking. Higher concentrations of nicotine and THC are becoming available to the youth consumer, with unknown prevalence and effects that warrant further research.

It took decades to understand the lethal health effects of smoking tobacco, which still kills over eight million people annually. We should not ignore those crucial lessons. We need to be vigilant and take all steps necessary to avert a public health catastrophe, now and in the future.