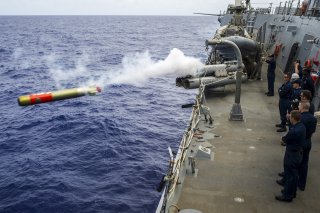 The new weapon, slated to enter production in the next several years, represents a collaborative effort between U.S. Navy weapons developers, academic researchers at Penn State University, and industry partners from Northrop Grumman. Existing heavyweight torpedoes have been receiving numerous electronics, explosives and guidance systems updates in recent years, but the VLWT effort is the first full torpedo solicitation the Navy has put out since the 1990s.

“We have a prototype,” Northrop Grumman senior program manager David Portner told the National Interest. “We learned a lot by building that prototype and then consulting with the Navy on where we saw the risks and the opportunity. We are also working on reducing the cost overall by trying to cut 50 percent of the current cost of some subcomponents.”

The VLWT program emerged from a previous effort to engineer and test a system designed to track, intercept, and destroy attacking enemy torpedoes. Penn State engineers adjusted the software to enable an offensive capability for the weapon, which still retains the ability to be programmed for torpedo defense as well.

“It is a software-enabled hardware, which has not lost its anti-torpedo software system, so it could easily fill both roles,” Portner said.

The VLWT is designed to fit into the six-inch countermeasure launchers on current submarines. They are not launched out of normal twenty-one-inch tubes. Interestingly, the weapons can be launched by surface ships from twelve-and-a-half-inch torpedo tubes on cruisers and destroyers and even fired from drones and helicopters. The smaller form of the torpedo also opens up a range of new tactical possibilities for torpedo attack as it can fire from more platforms and be carried in larger numbers. The larger Mark 54 torpedo is too large and too heavy for many of these applications.

“The weapon has been demonstrated to be dropped from air and opens up the anti-submarine platforms,” Portner said. “Submarines would be the initial platforms for the weapon, yet once it demonstrates its effectiveness we imagine the Navy will want to employ it on all the other platforms it can use it on.”