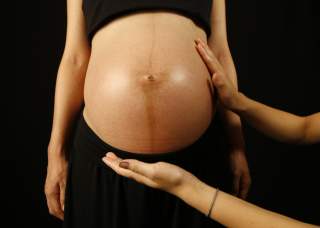 But in the lead up to giving birth and in the time after bringing home their new additions, many women may experience an unwelcome surprise. Family, friends and even bystanders are all too quick to comment on – and often criticize – an expectant or new mother’s weight.

This shaming can include judging a mother-to-be for her weight before becoming pregnant; the weight she gains over pregnancy; and the weight she doesn’t lose after having the baby. Weight stigma like this is potentially a very real threat to maternal health.

Outside the realm of pregnancy, research shows that experiencing weight stigma is stressful and harmful. For instance, it is associated with various health consequences, including weight gain, heightened cortisol and inflammation, and unhealthy or disordered eating. Despite this, little research has examined weight stigma’s effects on pregnant and postpartum women.

As a health psychologist studying weight stigma and its consequences, I see pregnancy as an important new avenue for research. This is because, in the context of pregnancy, the consequences may be multiplied by two. Stress that affects a pregnant woman might harm her unborn child as well.

Do pregnant women actually get shamed for their weight?

For instance, 21% indicated they had experienced it from immediate family. One woman said, “A good number of my family told me that I shouldn’t be ‘trying’ to get pregnant because I’m too heavy after they found out I was expecting.” Nearly 25% reported feeling stigmatized by the media. Also, 33% said they experienced weight stigma in the media, an example being, “society treats overweight pregnant women as less than.”

Health care providers were another common source. One woman shared, “One doctor told me I was terrible for getting pregnant at my weight … I was setting up my baby to fail.”

Moreover, these types of experiences didn’t just happen for heavy mothers. Women of all weights experienced some form of weight stigma.

There’s a widely held concern that heavy women are unhealthy and have unhealthy pregnancies, so many think we need to intervene on weight. My research, however, suggests that we should also be very concerned about weight stigma directed at pregnant and postpartum women.

For instance, in that same sample of 501 women, having experienced weight stigma was related to more symptoms of depression (both during and after pregnancy), dieting in unhealthy ways, more emotional eating behavior, and feeling stressed out. Among postpartum moms, weight stigma was also related to keeping on their baby weight.

In another sample, I similarly found that experiencing weight-based discrimination during pregnancy was associated with gaining more weight throughout the pregnancy. It also predicted more symptoms of postpartum depression and retaining baby weight in the first year after having the baby.

All these findings took into account a woman’s actual weight. It is not just that heavier moms tend to be more depressed or to eat in unhealthy ways. These relationships emerged regardless of a woman’s weight before becoming pregnant. So whether or not weight is a great indicator of health – which I argue it is not – making a pregnant or postpartum woman feel bad about her weight could be very harmful to her well-being.

Being pregnant doesn’t suddenly make it any less uncomfortable for someone to comment on your weight (or to touch your stomach). So as the year comes to a close, you might consider a new kind of New Year’s resolution. If your partner, friend, sister, neighbor or colleague is pregnant, be mindful in how you talk to her about her weight. Or better yet, maybe don’t even mention weight.

If we want healthy babies, that begins with healthy mothers. We all have a role to play in that insofar as we can avoid weight shaming.