Victory is Not Certain: Why North Korea Could Go Toe to Toe with America in a War 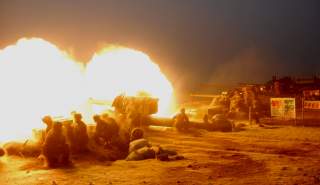 On an overcast day on the Korean peninsula, the air rumbles with the sound of distant artillery. Overhead, troop transports drone south, carrying paratroopers beyond the dazzling city of Seoul. Hovercraft slip into the Yellow Sea filled with commandos, and in the valleys and mountains of Korea tanks and armored personnel carriers throttle up and move into battle positions.

The North Korean People’s Army is headed south in an all-or-nothing bid to unite — or enslave — all of Korea under one flag.

I’m playing the wargame Next War: Korea to see if I can gain any insights into a hypothetical war on the Korean peninsula. The North has launched an all-out attack against the South. Seven days in, the war has been incredibly bloody, with heavy casualties on both sides. That’s not unexpected. But it might surprise you who’s winning.​

Turn one — the first three days

The war starts with a combination of North Korean missile strikes, Special Operations Forces raids and sabotage targeting allied air bases across South Korea. These asymmetrical attacks have cripple the allies’ high-tech fighters and attack jets, and what helicopter units remain flyable are limited in the overcast weather. It could be a week before allied planes are in the air in meaningful numbers.

In the meantime, South Korea’s standing army and the Americans of the 2nd Infantry Division are on their own.

In the early hours of the invasion, North Korea launches a massive airborne and airmobile operation to drop four light infantry brigadessouth of Seoul. The objective is to capture the South’s Osan air base, cut lines of communication into Seoul and disrupt the mobilization of Republic of Korea Army reserves. Heavy air defense fire scuttles the delivery of half of the force, but the remainder are now on the ground south of Seoul and represent a huge problem for the U.N. commander.

In response, the ROK shifts two divisions south: the 17th Infantry Division and the 2nd Marine Division. With attack helicopter support, the reinforcing divisions destroy the two North Korean infantry brigades. The North Korean air assaults have been a failure, but they did managed to force the South to shift two divisions away from the Demilitarized Zone to deal with them.

At the same time, two North Korean light infantry brigades, transported by hovercraft, cross the border north of Gimpo with the objective of taking the air base there. The port city of Inchon falls. The South shifts two more divisions to deal with them, meaning four ROK divisions in total have been diverted from the border.

One Northern brigade is destroyed and Inchon is liberated, but the attack relieves pressure on North Korean forces fighting on the DMZ. Pyongyang’s tactic — using diversionary brigades to tie down the limited number of South Korean forces — is working.

In the mountains north of Paro Lake, the 806th Mechanized Corps completely destroys a South Korean infantry division and, exploiting the gap, penetrates to the northeastern suburbs of Seoul. A fierce counterattack by Seoul’s defenders halts the 806th Corps, but the damage has been done.

Back in the DMZ, the North makes some progress, penetrating 10 miles into the South. The advance is slowed by the Han River and strong South Korean forces behind it. There is also serious road congestion as North Korean units are stacked up, shoulder to shoulder, for a continuous 40 miles.

This would be a great time for allied air forces to strike, but they’re still grounded after commando and missile attacks. The only air power available is from the aircraft carrier USS George Washington, somewhere in the Yellow Sea.

Northeast of Seoul, the U.S. 2nd Infantry Division — untouched by initial North Korean attacks — holds its ground rather than counterattack. The South Koreans scream for help from the Division’s Apache helicopters, but the Americans refuse to commit their already tiny force piecemeal. Finally, east of Donducheon, the ROK 2nd Division and elements of the South’s IV Corps strike, destroying a brigade of the North Korean V Corps.

At the end of turn one, the situation is extremely fluid. The DMZ front line is holding — but it’s brittle and lacking depth. Seoul, which was threatened in three directions, is now only threatened in two, but that’s little comfort. Northeast of Seoul in the vicinity of Uijeongbu, American and South Korean forces are about to be swamped by North Korean troops.

The ROK’s situation is hampered by commando attacks on their mobilization system, delaying deployment of critical reserves. Without those units, South Korea lacks a defense in depth and any North Korean breakthrough, like that of the 806th Corps, could be disastrous. On the east coast, ROK forces are being ground down by superior Northern formations. ROK troops retreat from the DMZ to form a new defensive line.

Owning the initiative, the North Korean People’s Army is defeating the South Korean army in detail. The North is winning.

Turn two — the next three days

The North Korean 38th Airborne Brigade conducts a second, successful airdrop near Osan. The U.S. 1st Brigade Combat Team, 82nd Airborne Division, having deplaned in Kunsan down the coast, has been marching north. The American airborne brigade, along with a U.S. Marine Expeditionary Brigade that has landed at Inchon plus the 1st ROK Marine Division, intercepts 38th Brigade.

The paratroopers and Marines attack and destroy the 38th Brigade before it can overrun Osan air base. The motley collection of American and South Koreans advance north into Seoul to form the right flank of the city’s defenses.

The first decisive battle of the west, and maybe even the war, is the Battle of Munsan. A city on the south bank of the Han River, Munsan is the linchpin of the Han River defense line. The North commits two full army corps totalling 60,000 troops to a cross-river attack supported by three-quarters of the available air power and all the North’s attack helicopters.

This attack can’t fail. If it does, the North could get bogged down, giving the South time to mobilize its reserves.

Arrayed against the powerful Northern force is the ROK 30th Mechanized Infantry Division. Even with its own attack helicopters, the Southern formation is outnumbered four to one. This is a tense roll of the dice.

The attack is a success for the North. The 30th Division is completely destroyed and the 815th pours across the Han River, flanking the surviving defenders and sending them reeling south. There is nothing to stop it from reaching Seoul and its own beleaguered defenders.

Soon, three full North Korean mechanized corps are bearing down on Seoul, with another two corps following close behind. The North has not even bothered to commit its main strike force, the 820th Armored Corps, which is still road-bound north of the DMZ.

Northeast of Seoul in the Uijeongbu sector, the American 2nd Infantry Division and scattered South Korean units must decide: do they stand fast against the odds or abandon the entire sector and take up the defense of Seoul. In the east, two North Korean corps are chasing the ROK defenders south, slowly picking off Southern units.

Does South Korea have a chance? Not without significant air and ground reinforcements, no. Fortunately, from this point on allied air power will grow in strength, and South Korean reserve army units will become available. Next turn I can expect the balance of the 82nd Airborne Division, flown in from Fort Bragg, North Carolina, plus a Stryker Brigade from Joint Base Lewis-McChord in Washington State.

But I don’t think those additional forces are going to show up in time to make a difference. The truth is, I would abandon Seoul if I could, and trade space for time. The allies can’t take another disastrous defeat like the Battle of Munsan.

The writing is on the wall: barring some miracle, defeat is a week away. I suck my teeth and sigh, and go to pour some whisky.