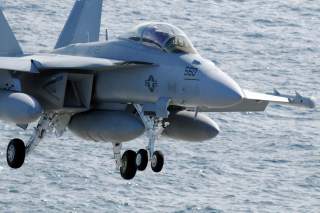 Called “VAQ-130 Zappers Cruise 2016,” the following cool video is probably the best EA-18G Growler footage you have ever seen so far.

Taken during the unit recent deployment as part of Carrier Air Wing (CVW) 3 on board the aircraft carrier USS Dwight D. Eisenhower (CVN 69) (Ike) in support of Operation Inherent Resolve (OIR), the clip is divided into six chapters:

As we have already explained the EA-18G Growler is the airborne electronic attack variant of the combat-proven F/A-18F Super Hornet. Thanks to its state of the art sensors and weapons, the aircraft can perform a wide array of missions including Suppression of Enemy Air Defenses (SEAD), Stand-off and Escort Jamming (where the Growler not only fly the traditional stand-off jamming mission but also provides the escort for other air assets thanks to the speed and agility inherited form the Super Hornet), Non-Traditional Electronic Attack (where thanks to its enhanced situational awareness the EA-18G achieves an unmatched degree of integration with ground operations) and Self-protection and Time-Critical Strike Support (where thanks to its Advanced Electronically Scanned Array [AESA] radar, digital data links and air-to-air missiles, the EA-18G has self-protection capability and is also highly effective for target identification and prosecution).