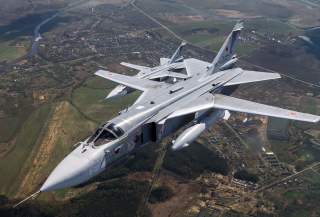 On January 23rd, the television channel of the Russian Defense Ministry released exercise footage of a Su-24M destroying several surface vessels under conditions of “poor visibility” in the Volgograd region. The targets, consisting of “submarines, ships, and other vessels,” were first detected by a supporting Su-24MP, a dedicated electronic signals intelligence (ELINT) Su-24 variant used for intelligence gathering and jamming attacks. The attacking Su-24M’s proceeded to drop 120-kilogram, high-explosive (HE) fragmentation “OFAB” bombs on the maritime targets.

The bombing proceeded with good effect on target (GEOT), according to a press statement by Russia’s Southern Military District: “the bombs’ average deviation was four meters, within the acceptable parameters of 15 meters.” The Su-24M crews also practiced nighttime landings and takeoffs, as well as countermeasures against hostile jamming attempts. The statement reveals that “over fifty units of aircraft and special air force equipment” were involved in the exercise, though it remains unclear how many of those were Su-24M’s.

Earlier in January, the Central Military District reported a similar exercise against ground targets in the Kurgan region. A Su-24MP spotted a moving armor column, which was then bombed at a distance of 2,000 meters by a group of ten Su-24M’s. The, goal according to the press release, was to practice effective bombing runs against “clusters of armored units.” The type of ground armor used as live targets for the exercise was not specified, but-- assuming that the Fencers were using HE OFAB rounds-- they are likely to be lightly armored vehicles.

Rounding off the Fencer’s busy month, Su-24M’s participated in a mock “duel” with Orekhovo-Zuyevo, the seventh Buyan-class corvette. According to the Black Sea Fleet, an Su-24M “executed detection, targeting, and simulated bombing operations” as part of Orekhovo-Zuyevo’s training regimen.

So, what’s the purpose behind these large-scale, back-to-back Su-24M exercises? There is no indication that any new technologies, whether weapons or otherwise, were tested in either case. It is also unlikely that the Russian Air Force feels the need to train pilots in handling a 36-year old fighter; in fact, the VKS is actively phasing out the Su-24M in favor of the newer, more capable Su-32 and Su-34 fighters.

Rather, Su-24’s are being used as a cost-effective training tools to practice general attack formations, evasive maneuvers, effective handling and targeting in harsh environments, bombing runs against a wide range of ground and sea-based targets, and countermeasures against jamming attempts. Given that over 400 Su-24M units and about as many original Su-24’s were produced during the Soviet Era, it’s not surprising that the VKS seeks to squeeze any remaining value out of them before they become too outdated even for training purposes.

The Su-24M is a 1980’s modernization of the original Su-24, updated with onboard LCD displays, a GLONASS-based satellite navigation system, ILS-31 heads-up display, and a redesigned cockpit.