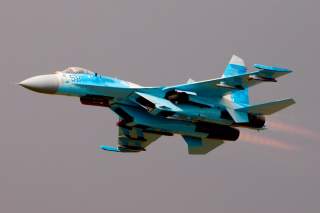 Published by Sputnink News on Aug. 13, 2019 the interesting video in this post features a Spanish EF-18M Hornet multirole fighter approaching Russian Defense Minister Sergei Shoigu’s plane as it was flying over the Baltic Sea and then being chased away by one of two Su-27 fighters escorting Shoigu’s aircraft, the Russian Defense Ministry has reported.

Noteworthy Sputnik News does not indicate on what date this incident took place. Most probably the video was taken from the plane carrying Shoigu, and consists of three sequences. In the first one we see the supposed transport plane of the Russian minister being escorted by a Su-27 on the port side. Then at 0:06, we see the Spanish EF-18M fighter flying near the Russian transport plane, always on the port side.

According to Sputnik, Shoigu visited Kaliningrad Oblast to observe part of the ongoing Seaborne Assault games, part of the broader Army Games-2019 competition, featuring participants from over two dozen countries. The Kaliningrad Oblast is a Russian exclave surrounded by Poland and Lithuania and a constant source of incidents between Russia and NATO, due to Russian flights in the area, sometimes over international waters and occasionally over the airspace of the Baltic republics.

Noteworthy interceptions are increasingly common because of the insistence of Russian airplanes to fly with the transponder off. The transponder is an electronic device that identifies an airplane. If you fly with it off, air safety procedures require the takeoff of fighters to identify the aircraft in question. This identification includes a photographic shot of the intercepted aircraft. That is the mission that the Spanish EF-18M would be carrying out, and hence it flew near the Russian transport plane.

The Spanish EF-18M that has taken part in this incident is one of the five Spanish Hornets deployed to Šiauliai since May, forming part of the Vilkas Detachment. The purpose of this NATO-led mission is the so-called Baltic Air Police (BAP), whereby the member countries of the Atlantic Alliance contribute to the air defense of the Baltic republics, whose reduced air forces do not have their own fighter planes. Currently, the Spanish EF-18Ms share their task in Šiauliai with four JAS-39C Gripen fighters of the Hungarian Air Force. In addition, the Royal Air Force (RAF) has deployed four Eurofighter Typhoons at the Ämari Air Base in Estonia.